If you’re a freshman at William & Mary, you’re phenomenal. After all, you are one of only 1,521 from a pool of 14,552. This feature series takes a look at just a few of the College's freshmen and the phenomenal qualities and experiences they have brought with them to W&M. – Ed.

Tommy Griffiths ’18 has the distinction of being one of only about 10,000 people recognized by the Appalachian Mountain Club as having climbed all 48 of the rugged peaks over 4,000 feet in New Hampshire’s White Mountains.

By the time he finished, in 2012, he had spent half his life on the endeavor. 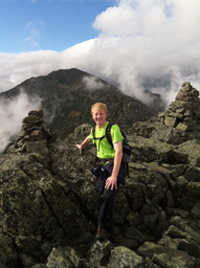 Griffiths, who is majoring in both economics and environmental science & policy at William & Mary, said he was 8 when his family hiked the lowest peak, Mount Tecumseh.

“At the top of the mountain, I remember my dad telling me there were 48 of these kinds of mountains,” he recalled, “and he asked me, ‘Do you want to climb them all?’

“I kind of impulsively said yes, without really realizing what the implications would be. So after that, we climbed a few more mountains the next summer and the goal started to seem more realistic. Then we picked away at them for almost 10 years.”

As of spring 2012, only 10,098 people – plus 138 dogs – had earned certificates as members of the White Mountains Four Thousand Footer Club, according to its website.

Griffiths completed all of his with his father. His mother and sister have not yet finished all the hikes, but aren’t far behind.

“We had a lot of family time together,” he said. “At home there are so many distractions and so much going on, it's kind of hard to find the time to just hang out and talk. But on the trail, when there's no one around, it's such a good bonding experience. I grew a lot closer with my mom and dad and sister over those hikes.”

That’s not to say his commitment never wavered. A few times when he was younger, he fought getting up.

“We’d usually get out to the trailhead around 7 in the morning, so it was definitely a full day, if not an overnight,” he said. “As I got older and more mature, I realized this is something I really want to do, and I started to enjoy it a lot more.”

As a result, Griffiths and his father have visited some of the most unique terrain in the country. The White Mountains are home to the largest alpine tundra environment east of the Rocky Mountains, featuring plant communities common hundreds of miles to the north. 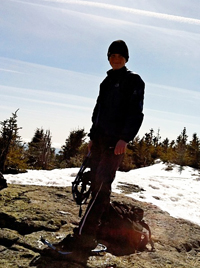 But Griffiths’ favorite hike is near a demure peak, Owl’s Head in the Pemigewasset Wilderness.

“It's one of the lowest mountains,” he explained. “It’s 4,025 feet, there's no view, and it’s a 19-mile day, but all the mountains that surround it are gorgeous. One hike in particular was the Bondcliff Trail. We watched the sunset from Bondcliff – it’s just a 200-foot straight rock face – and you can see for miles.”

For those who would follow in his footsteps, he advises to always hike prepared. Weather can change quickly and unexpectedly, and hikes can take much longer than originally anticipated.

“Bring enough stuff so you know you aren't going to be stranded in an emergency,” he said. “We did an overnight hike and stayed at a completely filled campsite. These people came in around 8 or 9 at night and were looking to get a tent site. There was just nothing available, and they had to find a spot just below tree line. They were scrambling and were totally unprepared. It was kind of bad."

Griffiths’ perseverance has spilled over into other areas of his life, as he slowly built up youth volunteer involvement in Senior Serve in his hometown of Rye, New Hampshire, over the past three years. The program pairs teenagers with area seniors to provide everyday assistance, such as yard work, household chores and help shopping. He has also volunteered over several winters helping people with disabilities learn to ski or to develop their skills on the slopes.

Neither has he had his fill of hiking, as he hopes to use his trekking experience as inspiration to complete the 2,160-mile Appalachian Trail after graduation.

“It definitely teaches you to persevere, because there were times when I kind of wanted to give up and not do it anymore,” he said. “But I stuck with it and it paid off in the end.”