{{youtube:medium|LQRdzHJm2Fs}}
A steady stream of students surged down the steps of Williamsburg Presbyterian Church on Friday afternoon, clutching brown paper bags and cardboard boxes stuffed with groceries. In the basement, others worked to unpack and sort the goods, making piles of stuffing, green beans, pie crusts – all ingredients that would go toward making a Thanksgiving meal possible for families that might not have one otherwise.

“No child should ever feel that they are lacking an opportunity simply because they don’t have the right foods to eat,” said Sarah Carroll ’15.

Friday’s effort was part of the annual “Turkeypalooza” event organized by the William & Mary Campus Kitchen, a student organization that provides meals to Williamsburg families in need throughout the year. Thirty-one Williamsburg families in public housing received Thanksgiving meals – complete with turkeys – as a result of the effort, and another 14, referred by Social Services, received meals without turkeys.

Many people don’t realize the extent of need that exists in the Williamsburg community, said Katie Graap, student coordinator for the W&M Campus Kitchen.

“A lot of people think about [the Williamsburg community] as college students and adults, but there’s actually a lot of poverty in Williamsburg,” said. “About 25 percent of the population is food-insecure.”

The W&M Campus Kitchen serves 200 meals per week, but “that’s just really the tip of the iceberg,” said Graap. “There are a lot of families that we just, unfortunately, cannot meet the needs of based on capacity.”

To make Turkeypalooza possible, the W&M Campus Kitchen relies on assistance from people across the William & Mary community. 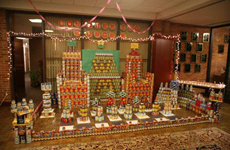 The members of the Black Law Students Association hosted their annual Thanksgiving basket competition at the W&M Law School to collect food items for the event. First year law students – grouped into firms – competed against each other to not only see who could collect the most, but who could be the most creative in displaying what was collected. One firm’s recreation of King William and Queen Mary’s thrones won the competition, while another’s theme park model – “Tort Gardens” – took the prize for most creative display. Altogether, the law students collected 7,000 canned goods for the event.

Once the judging was completed, the displays were dismantled, and the groceries were packed into bags and boxes for delivery to the church on Friday. There, volunteers from across the campus and community – including students, staff and alumni – sorted the goods.

Whitney Fields ’15 was one of the students who helped with that process, unloading vans and grouping the food items according to type. She volunteered with other members of the executive board of the W&M NAACP for the event.

“It’s definitely an eye-opener to see how many canned goods that we can lend and how much extra food is around that can go to people who really need it,” she said.

Along with Thanksgiving staples like stuffing and canned vegetables, the volunteers also found some non-traditional donated items, including root beer, tea and beans. Although some of those unusual items did not go toward the Thanksgiving meals, the volunteers with the W&M Campus Kitchen were still grateful to receive them.

“Our meal planners have a lot of fun with that and are creative,” said Anne Hefele ’15, public relations chair for the W&M Campus Kitchen. “We will keep some of the stuff to use it throughout the year.”

After all of the donated items were finally sorted, volunteers prepared the Thanksgiving meals in the church’s kitchen. Later, those meals were delivered to families across Williamsburg.

“I think it’s a really great thing that we are collecting food and distributing it to impoverished families around the area,” Ellen Nguyen ’16, who volunteers with the W&M Campus Kitchen every week. “If not all the time, then at least during special holidays like Thanksgiving everyone should have healthy, good food to eat.”

Graap, who has participated in Turkeypalooza for the last four years, said that the event has impacted how she now approaches Thanksgiving.

“I think it just makes me more grateful for everything I have, and it definitely encourages me to give back to the community,” she said. “It’s a reminder that Thanksgiving is just one day of the year. There are needs every day, and I think this just kind of gets people to realize that more.”