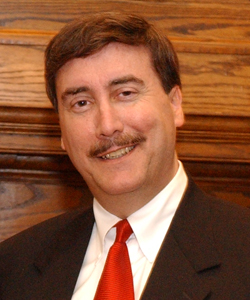 In July 2008, Larry Sabato correctly projected that Barack Obama would win the presidency in a near-landslide. He predicted a 364-174 margin in the Electoral College, just one vote away from the final tally of 365-173, and he also forecast President Obama’s exact 53 percent popular vote margin.

“Politics is a good thing!” is the slogan of Sabato, who has been chosen as the 2013 Hunter B. Andrews Distinguished Fellow in American Politics at William & Mary. The Robert Kent Gooch Professor of Politics at the University of Virginia and director of its Center for Politics, he will be on the W&M campus April 4-5 to meet with students, faculty and staff.  In 2006, Sabato was named the most accurate prognosticator by Fox News, MSNBC, CNBC and Pew’s Project for Excellence in Journalism.

“Larry Sabato will be a marvelous 2013 Andrews Fellow,” said William & Mary President Taylor Reveley. “His grasp of American politics is sweeping, his insight about the machinations of our political leaders is acute, and he knows how to bring all this to life in his books and teaching. He’ll be a delight to have among us for a time.”

In 2002, Sabato founded Sabato’s Crystal Ball, which is run by UVa’s Center for Politics. This free, nonpartisan website analyzes the current American political scene and predicts electoral outcomes for the U.S. House of Representatives, U.S. Senate, governors and presidential races. Over the years, the Crystal Ball has become a reliable source cited by journalists and other political watchers who extol its fair analysis and accurate predictions. While other pundits and news commentators predicted a victory by Mitt Romney in 2012, Sabato forecast a large Obama margin in the Electoral College, ultimately missing just two states.

Sabato’s best-known books include Feeding Frenzy: Attack Journalism and American Politics and The Rise of Political Consultants: New Ways of Winning Elections. His most recent book, released in January 2011, was Pendulum Swing, which analyzed the 2010 midterm elections and explored how the Republican victories could affect the 2012 presidential, congressional and state elections. His forthcoming book, The Kennedy Half-Century: The Lasting Legacy of John F. Kennedy, is slated for publication this fall.

Prior to joining the University of Virginia in 1978, Sabato worked for nine years with Virginia Democrat Henry Howell. At the age of 15, he joined Howell's first campaign for the Virginia governorship in 1968, and then worked on his successful run for lieutenant governor in 1971, and his campaigns for governor in 1973 and 1977.

Beyond teaching and research, Sabato is prominent in political media circles. In 1994 the Wall Street Journal referred to Sabato as "probably the most quoted college professor in the land.” His ability to offer a quick quip on politics and speak on a wide range of topics has landed him in articles on topics ranging from Clinton’s policy toward Iraq to negative campaign ads and the continued relevance of political parties.

A native of Norfolk, Va., Sabato graduated Phi Beta Kappa with a degree in government from the University of Virginia in 1974. He completed one year of graduate study at Princeton University’s Woodrow Wilson School of Public and International Affairs before being awarded a Rhodes Scholarship in 1975, which took him to study at Oxford University’s Queen’s College.  In less than two years he earned his doctorate in politics from Oxford.

The Hunter B. Andrews Distinguished Fellowship in American Politics was created in 1998 and is named after the late Hunter B. Andrews, a William & Mary alumnus who for over 30 years served as a Virginia State Senator from Hampton, Va. From 2003 – 2005, he served on the William & Mary Board of Visitors. The fellowship program brings notable journalists, politicians and scholars to campus each year to talk with students, faculty and staff. Previous fellows have included, for instance, Washington Post columnist David Broder; Tom Foley (D-Wash.), 49th Speaker of the U.S. House of Representatives; Representative and civil rights leader John Lewis (D-Ga.); journalist, author and Supreme Court scholar Linda Greenhouse and former Sen. John Warner (R-Va.). The 2012 Fellow was former Virginia Gov. Gerald L. Baliles.