Saunders’ appearance comes as part of the Patrick Hayes Writers Series. Each year, the English Department invites contemporary, professional writers from all genres to visit the campus and share their work and experience.
In 1991 the College received funds from the estate of Patrick Hayes to create an endowment supporting a festival for writers. In recent years the festival has evolved into a series, with several events held during the academic year.

Saunders, whose Tenth of December is his fourth book of short stories, will read from his works. The event is free and open to the public, with Saunders fielding questions from the audience and discussing how he approaches writing short stories. A reception will follow.

Saunders has been described by novelist Joshua Ferris as “like something of a saint. He seems in touch with some better being.” Saunders won the National Magazine Award for fiction in 1994, 1996, 2000 and 2004. Two years later, he won the World Fantasy Award for his short story CommComm. 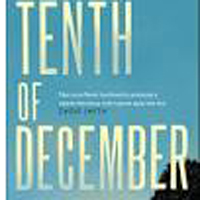 Junot Díaz, a Pulitzer Prize winner for fiction, described the Saunders’ effect by saying, “There’s no one who has a better eye for the absurd and dehumanizing parameters of our current culture of capital. But then the other side is how the cool rigor of his fiction is counterbalanced by this enormous compassion. Just how capacious his moral vision is sometimes gets lost, because few people cut as hard or deep as Saunders does.”

The late award-winning novelist David Foster Wallace, author of Infinite Jest, which Time labeled as one of the 100 best English-language novels from 1923 to 2005,” once told Harper’s Magazine that Saunders is “the most exciting writer in America.”

Novelist Douglas Unger and memoirist Tobias Wolff, then a professor at Syracuse University, lobbied for Saunders to be accepted into Syracuse’s master’s of Fine Arts program. His background made him an irregular candidate for the prestigious program.

In 1981, Saunders graduated from the Colorado School of Mines with a Bachelor’s Degree in geophysical engineering.

“I was aware that many of the other students were from Ivy League English departments, whereas my undergraduate degree was in geophysics, from the Colorado School of Mines,” he told the Missouri Review in 2001. “So while the other students knew all about Shelley and Keats, I knew about Alfred Wegener, the father of plate tectonics, whom we affectionately used to call ‘Big Al.’

“But fiction is open to whoever comes in the door, as long as you come in energetically, and so I had a feeling there was room for me.”

After gaining his degree in 1988, Saunders spent seven years working as a technical writer and geophysical engineer for an environmental engineering firm in Rochester, N.Y. He also worked with an oil exploration crew in Sumatra.

“It might have been a good thing to have come from a non-traditional background because I'm not exactly an intellectual giant,” he told the Missouri Review. “I suspect that if I'd had a more extensive background in English before I started to write, I might have ended up just badly parroting other writers. But because I hadn't read enough to even know whom to parrot, the experiences of my own life were what drove me to fiction. Then the task became to find a style that would do justice to these experiences and wouldn't require too many big words or complicated flashbacks.”

Tenth of December is presently 12th on the Times’ bestselling list of fiction.