Here’s how it works: A mosquito bites a bird, sucking up a virus along with the blood. Later, the mosquito bites you, transferring the virus to your bloodstream.

That’s how you get West Nile disease.

In this scenario of disease transmission, John Swaddle explains, biologists refer to the bird as the “host,” while the mosquito is the “vector.” Swaddle, professor of biology at William & Mary, will discuss what can be done to minimize outbreaks of West Nile and other vector-borne disease in humans, as he inaugurates the College’s Faculty Lecture Series. 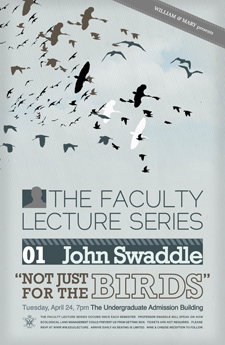 Swaddle will present his talk, titled “Not Just for the Birds: How ecological land management could prevent us from getting sick,” at 7 p.m. April 24 in the Undergraduate Admission theatre. The presentation is open to the public.

“This new lecture series is designed to celebrate the intellectual life of the College by showcasing the excellence of William & Mary faculty,” said Provost Michael R. Halleran, the driving force behind the establishment of the series. “We’re very happy to launch this new initiative with Professor Swaddle and his talk about this important public health issue.”

Swaddle says that the illnesses transmitted to humans from animal hosts through vectors are responsible for some of the most serious disease outbreaks in history. Bubonic plague is transmitted from rat hosts by flea vectors, for instance. A more current example, Swaddle explained, is Lyme disease, which typically is developed in small mammals and transmitted by tick vectors. Another current example is West Nile, the bird-host/mosquito-vector combination that is the focus of Swaddle’s research.

“If you look at bird species and how effective they are as hosts of West Nile, there’s a small number of bird species that are really effective hosts. If you have a bird population dominated by these effective host species, the virus replicates a lot, and you get a higher amount of the disease in the area,” Swaddle said.

Many of the bird species that are effective hosts for West Nile happen to be common species, and the ones that are most likely to thrive in developed areas, he said. Crows are particularly susceptible to West Nile, and massive crow kill-offs are one of the early warning signs of a West Nile outbreak, but Swaddle said the virus kills crows so quickly that they probably don’t survive long enough to become effective hosts.

“There’s also another bunch of smaller songbird species, like sparrows and finches, which also seem to be effective hosts, but actually live longer,” he said. “So in terms of the threat to humans, because the finches and the sparrows live with the virus for longer, there’s more of a chance of a mosquito biting them and then biting us.”

Swaddle’s solution is simple: increasing diversity of bird species will mean fewer sparrows and finches, effectively diluting the pool of effective West Nile hosts. In his Faculty Lecture, Swaddle will discuss replication rates in various bird species and how a more varied and diverse avian population is bad for the virus, but good for us.

He notes that his presentation focuses on West Nile, but he said his concept of encouraging population diversity can help to prevent outbreaks in humans of any number of diseases that replicate in wild animals and are spread by vectors such as ticks and mosquitoes. He added that increased wildlife diversity can be an effective tool in limiting human exposure to established diseases as well as in preventing new, exotic strains from getting a toehold in an area.

“Lyme disease is probably the most important emerging disease in this area. It’s much more prevalent than we think,” he explained. Swaddle noted that global climate change has resulted in some new, potentially dangerous viral and bacterial infections moving into Virginia from the Caribbean.

In his April 24 lecture, Swaddle will outline the mechanism by which vector-borne diseases spread. He’ll also outline various land-management practices that can bring about a more diverse bird population and show the potential economic and public-health impact.

“In my talk I’m going to discuss the actual health benefit. Can you put a dollar value on this?,” he said, adding that he will reveal calculations that show “an actual economic benefit of having birds around.”

Tickets are not required but due to limited space the College asks that anyone planning to attend please RSVP using the online form at https://forms.wm.edu/4424.