She arrived at William & Mary from Paris – France, not Kentucky – filled with desire to learn business and marketing, anxious to compete on the women’s golf team, and more than a little apprehensive about adapting to a strange language and a radically different culture.

“All there was time for was the golf team, going to class, and The Cheese Shop,” e-mails Szostak, her ebullient personality coursing through the computer. “Someone ‘moved my cheese,’ or I left it in France, and I had to get used to American cheese.”

She did and now, in a story that speaks to W&M’s philosophy of the value of a liberal-arts education, American audiences are becoming increasingly accustomed to seeing her face in their movie houses and home theatres.

Szostak plays Julie, the increasingly confused girlfriend of star Paul Rudd in “Dinner for Schmucks,” which opened nationwide on July 30. The story, also starring comedian Steve Carell, centers on a series of dinners sponsored by rich corporate executives in which the object is for invitees to bring the biggest fool or idiot they can find as their guest. The person judged to have lassoed the biggest loser receives a promotion within his company.

The movie is fashioned after the 1998 French farce, “The Dinner Game.”

“I saw the French film when it came out about 10 years ago and loved it,” Szostak said. “The French film is quite cruel but in a great French way, and I don't think it could translate . . . I love  ‘Dinner for Schmucks,’ too, and to me the American one is like a great juicy steak and the French one is like a steak tartare. Raw.”

“Dinner” is Szostak’s 17th film – she played French fashion magazine editor Jacqueline Follet in “The Devil Wears Prada,” starring Meryl Streep -- and it won’t be long before Number 18, a comedy short, will be seen on the festival circuit. She is presently perusing a host of scripts, and has a “few things in the works, but nothing set yet.” 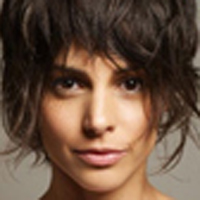 Toss in appearances on “Law and Order: Criminal Intent,” “The Sopranos,” and “As the World Turns,” plus two stage acting roles in New York, and Szostak stays busy. But what else would you expect from an actress New York Times movie critic Stephen Holden described in 2006 as a “smoldering star” after seeing her performance in the film “Satellite.”

Do “Dinner” and “Prada,” et al signify that she is done smoldering and her career is in full flame?

“Ha!  Never!” she wrote. “It is fantastic for me to be part of this big movie, and it's a big step forward, but each role is different and that's the wonderful part about being in a creative career. There is no arriving . . . In some ways I think I will be an eternal beginner and strive to discover and learn every time.”

Szostak, who majored in business at William & Mary, moved to New York after graduation and worked in marketing at Chanel (putting her degree to good use, she says). It didn’t take long for her to realize she was in the wrong career. By chance, she received an opportunity to do some modeling, during which time she took her first acting class.

In 2005, she was watching the HBO show “Unscripted,” in which an up-and-coming actor would receive his first big break opposite Streep. Obviously, Szostak had no inkling that it wouldn’t be long before she would be in a similar situation with the same iconic actress.

“I said out loud, ‘How great would it be if I had my first big role in a studio movie opposite Meryl Streep?’ ” Szostak recalled. “So when I got the audition (for ‘Devil’), it was quite surreal.

“Working with Meryl Streep was incredible; she was unbelievably gracious. I had a very small role in the film, worked only a few days, and she came to me before the scenes and asked me questions (like), ‘Why were we so dressed up if it was morning?’ . . . She is so dedicated and generous, such an amazing woman to have worked with.”

Szostak “treasures” her memories of W&M, and says she would gladly return to guest-lecture on film. She taught a “drill” class for French 101 and says she really got a lot out of it -- and had a great time with the students.

“If anyone uttered a word of English, I squirted them with a water gun!” she exclaimed.

With healthy self-deprecation, she tells the story of her birthday freshman year and her struggle with the nuances of English. The girls in her dorm asked her what topping she wanted on her pizza, to which she replied “Egg.”

When she first got to W&M  “I was asked the most bizarre questions, like ‘Do you eat salad in France?’ Someone asked my Pakistani friend if they lived in trees in her home country, and I thought ‘What a bunch of Schmucks!’ Yet when I told the girls that my favorite topping was egg, I became the schmuck!!”

Ultimately, Szostak says, W&M gave her “an incredible education in the classroom and in life. . . . What I realized is all the tough times at the beginning are what actually made my experience so valuable . . . adjusting to a different environment, learning to understand a different culture, and to appreciate the differences. That’s what it's all about. Pretty soon, I realized that I loved living in the United States. I've been here ever since!”

And, it appears, making her mark in movies in increasingly substantial ways.