Professor Deborah Steinberg of the Virginia Institute of Marine Science, College of William & Mary, will join an international team in late May and June for the first part of a three-year study of how the Amazon River's huge freshwater plume affects the biology and chemistry of the Atlantic Ocean.

The $1.2 million project is funded by the National Science Foundation.

The team's goal is to better understand how ocean plankton and river-borne nutrients interact to affect the global carbon cycle and climate change. That goal is spelled out in their project title and river-themed acronym: Amazon iNfluence on the Atlantic: CarbOn export from Nitrogen fixation by DiAtom Symbioses (ANACONDAS). 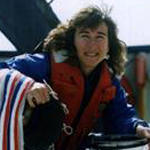 The ANACONDAS team—which also includes researchers from the Bigelow Laboratory for Ocean Sciences, Georgia Tech, San Francisco State University, the University of Georgia, the University of Maryland Center for Environmental Sciences, the University of Southern California, and Brazil—will sail from Barbados in late May aboard the 279-foot RV Knorr for a 5-week expedition to the open waters of the western equatorial Atlantic, where the Amazon pours up to 11,000,000 cubic feet of freshwater into the ocean every second. By contrast, the Chesapeake Bay is the nation's largest estuary, with 15 trillion gallons of water. The Amazon River can discharge that much water in two days.

"The size and power of the Amazon are incredible," says Steinberg. "Its total flow exceeds the next 10 largest rivers combined, and it lowers the salinity of the Atlantic more than 300 miles out to sea. Its plume can affect the ocean up to 1,000 miles offshore.

"Our goal," she continues, "is to determine how marine plankton and bacteria use nutrients in the plume, and how that can ultimately lead to transfer of carbon dioxide from the atmosphere to the deep sea."

Carbon that reaches the deep sea can remain there for thousands of years and contributes nothing to current global warming.

Steinberg says that marine scientists "traditionally viewed the open waters of the tropical Atlantic as a nutrient-poor, ‘retention' food web, in which the CO2 that plankton take up during photosynthesis is recycled within surface waters because the plants are too small to sink very fast on their own, and the grazers that eat them are smaller too." Carbon dioxide in these waters typically reaches a balance with the level of CO2 in the atmosphere, which currently stands at 389 parts per million (ppm).

But an earlier study—led by members of the ANACONDAS team—revealed that levels of carbon dioxide in tropical Atlantic waters influenced by the Amazon plume measure 239 ppm, far below the atmospheric concentration. That led the researchers to suspect that a different food web was operating in the plume area—namely the type of "export" food web more typically found in nutrient-rich coastal waters.

"In export food webs," says Steinberg, "larger plant plankton such as diatoms dominate. The zooplankton that graze on them are also larger. When these larger and heavier plants die, or zooplankton eat them and release fecal pellets, the carbon in their tissues is much more likely to sink to deep waters."

This export of carbon to depth—what marine scientists call the "biological pump"—allows the surface waters to soak up more CO2 from the atmosphere, thereby reducing the greenhouse effect.

The catch, though, is that the Amazon's waters are relatively poor in the forms of nitrogen that plankton need for growth. Without these nitrogen compounds, resident plankton would be unable to tap the river's other more abundant nutrients, particularly phosphorous, and the biological pump would falter.
"In the plume," says Steinberg, "evidence suggests that the nitrogen needed to prime the biological pump is supplied by nitrogen-fixing bacteria."
Like the bacteria that inhabit the roots of peas and other legumes on land, these marine "diazotrophs" are able to extract nitrogen gas directly from the environment.

"One of these diazotrophs—Richelia—lives in an amazing symbiosis," says Steinberg. "It lives just below the glassy shell of the diatom, providing it with nitrogen for growth and in turn receiving protection and buoyancy. From prior work we know that DDAs [diatom-diazotroph assemblages] are responsible for a significant amount of the CO2 drawdown in the Amazon plume."

During the upcoming expedition, the VIMS team—Steinberg, marine technician Joe Cope, graduate student Brandon Conroy, and recent William & Mary graduate Miram Gleiber—will deploy large nets at a series of sampling sites inside and outside the plume in order to collect and identify zooplankton from different depths. They will then use on-board and later laboratory experiments at VIMS to better understand what and how much the different zooplankton species are eating, and how much carbon they export through fecal pellets and other mechanisms.

Their efforts will complement work by shipmates aboard the Knorr to further study the resident phytoplankton and bacteria; record levels of nitrogen, phosphorous, and other elements; map the plume's extent using satellite imagery; and measure how much and how fast carbon sinks to depth beneath the plume.

"The ultimate goal of the project," says Steinberg, "is to quantify and model the plume's influence on the global carbon cycle, and to understand how its influence might change with a changing climate."