It looks like the campus Cooper’s hawks are trying to move in.

On July 20, Josh Froneberger '11 was walking up the Washington Hall stairs to Spanish class when Margaret Turner, a classmate, stopped him.

"She said, ‘Hey, did you notice there was a bird up there?,' " Froneberger said. "I looked up in a window of the stairwell and there was a Cooper's hawk. I was, like, Oh, no! One of those fledglings flew into the building."

That's exactly what happened. A pair of the aerobatic raptors raised a clutch of four chicks this year in a nest up in one of the beech trees lining the Sunken Garden. The nest was clearly visible from the sidewalk in front of Washington Hall and the Cooper family became unofficial summer mascots at the College of William and Mary. The parents and their nearly independent offspring have been hanging around the old home tree since the chicks left the nest in mid June. Someone had propped open a back door of the building and one of the fledglings flew in.

Froneberger had gained some hands-on experience working with birds since transferring from Thomas Nelson Community College to study biology here at William & Mary. But those were bluebirds. The bird up on the windowsill was a chicken-sized predator that eats bluebirds, as well as other passerine species. Froneberger took out his cell phone and called Dan Cristol, professor of biology, for advice.

"He told me how to catch the bird safely without hurting the bird or hurting myself. Margaret went and got a stool for me, because the window's kinda high. I had an extra t-shirt, so I threw the t-shirt over the bird and caught it." 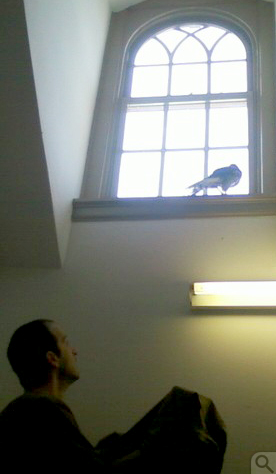 Froneberger got the t-shirt over the hawk's head in a single toss. Once he had the hooded hawk in hand, the bird was even calmer than the birds he worked with over two summers with Allyson Jackson, a grad student in biology who tracks bluebirds with radio telemetry.

"It was a lot less dramatic than I expected it to be," Froneberger said. "It was like handling a bluebird, only bigger. To be honest, I'd expect more of a fight from a bluebird."

By this time, the entire Spanish class had gathered in the stairwell. The whole class trooped down the stairs together and went outside for the release, but not before Froneberger gave a short impromptu lecture on the species. Turner snapped a couple photos with Froneberger's cell phone. As soon as the hawk was released, Ma and Pa Cooper swooped down to check on the prodigal chick.

"It really ended up being a perfect scenario," Froneberer said. "It wasn't harmed at all and the parents were right there."

Cristol says that Cooper's hawk parents will keep an eye on their offspring for several months. Come fall, the hawks will migrate south, but he added that he expects the parents to return to a nearby tree next spring to raise a new clutch. Froneberger deserves high marks for his rescue efforts, Cristol said.

"I give Josh an A plus for knowing to call me," he said. "He also gets an A plus for being able to do the rescue himself—and not make me come in to campus."