A professor at William and Mary and her students have been examining the way our brains react when we're shown faces from a variety of races. They are finding that although the idea of our society as a "melting pot" may be a popular idea, deep inside, our minds don't work that way. Our brains perceive more differences than we realize.

"It's good to research people's differences," said Cheryl Dickter, assistant professor of psychology. "That's how our brains work—we see differences in people. But what you do with those differences is the real important and interesting part of the equation."

Dickter and her students look at social cognition: how we think about social things such as race and gender. Using tools ranging from electroencephalography (EEG) to reaction time, they examine the mind's perception of race, gender, sexual orientation and more and how people react to prejudicial comments about those things.

Dickter heads up the Social Cognition Lab in William & Mary's Integrated Science Center. In the lab, Dickter and her students—both graduate and undergraduate—look at the attentional and cognitive processing that people go through when they categorize a face.

"One of the basic processes we engage in is social categorization. So when we see a face, we categorize the face on race, gender and age-those are the three categories that pop out, and that's something we do automatically," said Dickter. "And it's something we have to do. Putting people into categories helps us conserve cognitive resources and lets us pay attention to other things that are more important."

To look at those processes, the lab uses EEG to measure the brain's electrical activity. Volunteer subjects—students at the College—are shown a series of target faces on a computer. Each face is only shown for about a half of a second at a time. Neural reactions are recorded by the EEG.

Half a second tells a lot

"In that half-second, we can actually tell a lot, from how much they are paying attention to a face to what they're encoding about that person based on their race or their gender," Dickter said.

Previous research has shown that white participants initially pay more attention to black faces than they do to white faces-this occurs at about 200 milliseconds after seeing a face. What's unique about Dickter's lab is that they've begun looking at this effect among other races.

Dickter has found that this early attention leads people to activate stereotypes associated with the race one sees.

"It's not necessarily that you believe the stereotypes, but rather that you just know them," Dickter said. "So whether you are looking at a white, black, or other-race face, you are activating stereotypes associated with that group. That's why it's important to look at these automatic processes."

As stereotypes are activated, it can affect the way we interact with people, she explained. The whole process from attention to interaction takes mere seconds: A man sees a face; he pays more attention to it because the person is of a racial group he's not used to seeing; paying attention to it leads his mind to bring up stereotypes associated with that race; and those stereotypes cause him to act differently toward that person.

"By understanding those automatic parts of processing, we can understand how perception leads to differences in people's behavior," she said. 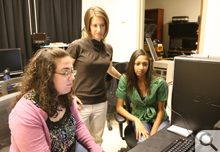 which people do have control. Over the last few years, Dickter has been looking at how people react to the prejudicial comments of others.

"What I'm interested in is your reaction to a prejudiced remark: what you're going to say and what factors are going to influence what you say," she said. "Especially if you're not the target of the comment."

The lab members have begun to simulate a social situation in which the participant hears a prejudicial remark. Currently, the lab is doing this experiment with participants via Instant Messenger. IM works well, Dickter said, because IM-ing participants usually assume that the interjection of a racially charged remark is not a part of the experiment. IM also allows the researcher to examine people's reactions when the social costs of responding are minimized.

"We've taken away some of the social costs, but the benefits are still there," said Dickter. "The participants may reason, if I confront this person, then maybe they'll think about it next time when they go to say something racist."

Dickter said students are particularly interested in this experiment because they see it as immediately relevant to their own lives.

"They hear these kinds of comments all the time, and it's hard to know how to act," said Dickter. "So a future direction of these studies will be how to train people or how to give them some sort of direction on how to act in these situations. This has applications for diversity training."

Although the lab's research mainly focuses on race, its researchers are also interested in other social categories. For instance, Dickter recently submitted a paper for publication with graduate students Kyle Gagnon and Ivo Gyurovski focusing on both race and gender. They found that black people pay more attention to gender and white people pay more attention to race when they are shown faces and asked to do a task that does not involve social categorization.

Dickter is also working with a researcher from the University of Washington on a neurological study of perception of gay and lesbian facial images. Previous research has found that people process the faces of gay men differently than the faces of straight men even when no information is provided about the sexual orientation of the faces they were presented with. Previous research has also found that people are better than chance at categorizing people's sexual orientation based solely on seeing their faces for half a second.

"What we're looking at now is trying to tease that apart," said Dickter. "We're examining potential neural differences between looking at a straight person versus a gay man or a lesbian, and whether this depends on the perceiver's own sexual orientation."

Dickter hopes the lab's work will lead to better diversity training and will help individuals understand their own automatic biases and how they can confront prejudice.

"Helping us understand how automatic it is can help us combat the prejudice side of it," said Dickter. "If we all automatically activate these stereotypes, the really important part of it is what you're going to do with it later."