In a Washington Hall office the size of an average walk-in closet, the future of the Arabic language is being designed. Not the language itself, but the manner in which the language will be taught for years to come.

Close friends John Eisele and Driss Cherkaoui, both associate professors of modern languages and literatures at William & Mary, plan to devote much of their foreseeable future to producing seven textbooks. Three of them will focus on Modern Standard Arabic, the written form that is used across the Arab world. They also will write one volume each on the four major dialects of the language: Moroccan, Egyptian, Syrian and Iraqi. All will be supplemented with videos, CDs and other multi-media accompaniments.

The United States Department of Education is so enthusiastic about this monumental project that it has awarded Eisele and Cherkaoui a three-year International Research and Studies grant totaling $728,000. The grant will support the development, testing, revision and production of a little more than half of the project. That would include two levels of Modern Standard Arabic, and the Moroccan and Iraqi dialect modules.

During the spring semester, the professors were writing part one of the Modern Standard Arabic textbook, as well as working on the textbook on the Moroccan dialect.

Pearson Education is publishing the series. Although Pearson publishes in many different languages, the professors say this will be Pearson's inaugural effort at publishing a textbook in Arabic.

A portion of their work has already been pilot-tested at the University of Arizona, under former student/now Arabic instructor Scott Brown. Brown reported that his students "really liked it, really thought it was excellent." The professors are sounding out contacts at other universities about using their textbooks, particularly for summer programs. Cherkaoui, who founded the Arab-American Language Institute in Morocco in 2008, said he will start pilot-testing their work there this summer.

A different way to teach Arabic

"This is really different from anything Arabic has ever had," Eisele said. "And it is really unusual for a major publisher to publish in a foreign language for which the audience is so small. So this is a big step for them."

The audience seeking to learn Arabic may be small by comparison, but seems to be growing like a teenage boy.

Eisele joined the College in 1994; Cherkaoui arrived two years later. In those days, they may have taught Arabic to between 60 and 80 students. Following the terrorist attacks of September 11, 2001, that number grew steadily. Now the two professors work with between 250 and 300 students. Relative to the size of the College, the William & Mary program is one of the most robust in the country.

"The market changed tremendously after 9/11," Cherkaoui explained. "The number of students grew to four and five times more than before. The same thing happened with hiring. Before 9/11, all across America there were maybe two or three university teaching positions open per year. Now, there are universities that have so many openings they can't fill them all, since hundreds of universities have started Arabic programs. The need is there for a more complete manner of teaching the language."

The U.S. government agrees, and feels a more inclusive style of teaching Arabic can only help in the war against terrorism.

"The government actually has been trying to force the field to teach more dialects," Eisele said. "It's had a salutatory effect on our project. It's a shame it has to come through this channel, but it forces the field to deal with linguistic reality. The American government and military felt a tremendous demand for fluency in Arabic."

For the past 15 years or so, there has been one dominant Arabic textbook used in the United States:
Al-Kitaab. That's it. Produced by Georgetown University in Washington, D.C., Al-Kitaab is three volumes long, supplemented by a host of videos.

"It's well done, but it doesn't really teach Arabic in a communicative fashion," Eisele explained. "It doesn't really get into the different dialects. It does have some excellent supplementary materials, but it can be improved upon."

They also found that Al-Kitaab didn't sustain or challenge third- and fourth-year students to their satisfaction. The two men were spending hours revising outside materials, getting videos for their class, making up question sets to accompany reading assignments.

"Finally, you have a pile of materials and you ask yourself, ‘What am I going to do with all of this?'," Cherkaoui said. "And all you can think of is ‘Do something with it.'"

Several years ago, the men began meeting once a weekly at a coffeehouse. They not only discussed the ancillary material they were creating, but they also explored the intellectual aspects of the Arab world, especially poetry and literature, themes that they could wrap into the textbook.

"We could not start this from scratch if we had not known each other for so long," Cherkaoui said. "We have been talking about something like this for a long time."

Eisele produced a book proposal that Pearson heartily endorsed. The prospectus for publication became the foundation for the grant application, which carries with it the possibility for renewal. 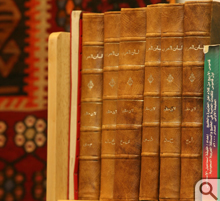 Convincing college educators that there is value in something other than the traditional approach taken by Al-Kitaab will be an obstacle for the professors. But it may be one of the less imposing. There will be many hurdles to be scaled before all is said and done.

Arabs view their language differently from the way other cultures view their languages. To them, classic Arabic is a "sacred" language, since it is the language of the Koran, and it is valued above all other forms of the language. The modern version of this classical language, Modern Standard Arabic, is the language that is taught in schools throughout the Arabic world. It is used in most newscasts, as well as being the primary form of the written language used in literature and journalism.

Many involved in teaching Arabic, both native and non-native speakers, believe that Modern Standard Arabic should be the primary focus of Arabic language teaching in the first two to three years, leaving the learning of the everyday colloquial speech to a later point in time-if at all.

"This attitude is something we have to deal with," Eisele said. "Hopefully, we can change some of those attitudes, but things have already begun to change. A generational shift is going on right now in the States with regard to teaching the dialects, but in the Arabic world the traditional view still holds sway. This is despite the fact that Arabs themselves rarely use the formal standard language for communicative tasks outside of a small circumscribed group. This is especially true in Egypt and Lebanon, where the dialect has been gradually taking over some of the tasks (such as news reading) usually assigned to the standard language. But even in these countries, many traditional language educators view the teaching of dialects as beneath them."

Eisele continued: "We believe there's room for us to establish a base of support, and to say ‘You know, we're not against the literary language. We want to teach it and teach it well. But we also want to teach some of the common, everyday language, and that means we have to take in some of these dialects as well.' "

Eisele and Cherkaoui argue that any language that dates back almost 2,000 years carries a lot of culture with it. Previous texts have not done a good job of incorporating information on that cultural background, which they consider a serious drawback, and one which they are taking great pains to avoid.

"American students need to understand what this culture is all about," Cherkaoui said. "Is language separate from culture? I don't think so. Without understanding the culture, you may know some language, but that's all you know. Someone who comes to America and knows English, but not our culture, feels really strange. That adds some weight to our shoulders. We really have to think clearly how to implement Arab culture into the textbooks."

The plan is to film videos in several Arab countries, authentic scenes featuring authentic people employing everyday dialect. That work has been contracted out by Pearson, but there is a commitment to shoot in such a way as to "put" students into real situations.

"We hope," Cherkaoui says, "to give an adequate accounting of both the colloquial dialects as spoken languages and of Modern Standard Arabic as a written language, and how they function together in Arab society and culture. We are not partisans of one side or the other (colloquial versus Modern Standard), but believe that students should be exposed to the variation in the Arabic language situation as early as possible. This will serve to deepen their understanding of Arab societies, cultures and identities."