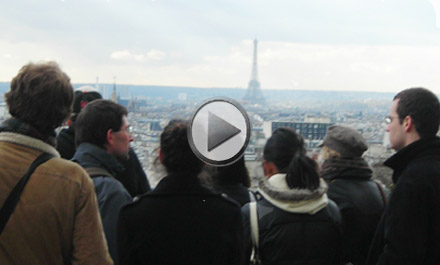 William & Mary’s first two participants in the College’s partnership with the Internships in Francophone Europe are back on campus this semester as staunch advocates for spending a semester abroad. Immersion in language was only a minor benefit, they agreed. Mind-stretching exposure to research within a different cultural context was the real benefit, they said.

Lenore Dukes (’10) served her semester-abroad internship with Ligues des Droits de l’Homme (a French institute dedicated to the study of human rights). Through her research, she explored differences between the French and the U.S. approaches to diversity and human rights.

Advocacy of group rights is practiced by “progressive” organizations in the United States, she said. That same practice is viewed with suspicion in France, where labeling by group has been used as a tool of oppression and where promotion of diversity has been challenged as diverting attention from issues involving basic human rights, she suggested.

“I’m not quite sure whether I’m going to the French model or the American model or something of my own.,” Dukes said.

Caryne Eskridge (’10) served with the Musee social (a foundation for the study of social issues). She considered French approaches to colonialism, particularly in view of the International Colonial Exposition of 1931 in Paris.

She discovered that the exposition featured French colonialism within a context of beneficent occupation. The rewards of French culture were considered more than sufficient exchange for labor and services, she suggested. Meanwhile, outside the official representation, questions were being raised about what she termed the oppression practiced in extracting resources.”