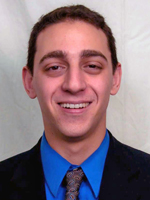 Soon-to-be-graduate Jacob Lassin is getting international attention for his honors thesis.

Recent tweets from VIPs Edward Lucas, international editor of the “Economist,” and Evgeny Morozov, visiting scholar at Stanford University and author of “The Net Delusion,” give big hurrahs to Lassin’s thesis about the commemoration of World War II in Russian social media.

“I was shocked, and honored,” said Lassin, a Russian and post-Soviet studies and government double major at the College of William & Mary. He’s also the recipient of a 2011 Critical Language Scholarship by the State Department, Bureau of Educational and Cultural Affairs, where he studied Russian in the city of Ufa for a summer.

Just a few days after the tweets, reporter Zach Peterson with Radio Free Europe, an international news and broadcasting agency, reviewed Lassin’s 95-page thesis. Peterson praised Lassin for getting “tweets of approval” from Morozov and Lucas and for writing “a compelling thesis on Russia and the ‘myths and memories’ of the country’s involvement in World War II.”

In his thesis “From the Trenches of Stalingrad to the Digital Front: The Myth and Memory of WWII in the Soviet Union and the New Russia,” Lassin details how war mythology has been used over the past 60 years to tell the story of the war. He examines how oral histories from veterans and websites differ from how the war was talked about during Soviet Union rule, and how it’s perceived in Russia today.

During the war, Lassin describes how Soviet leader Josef Stalin used the war narrative to glorify his leadership and control the memory and meaning of the war in order to maintain popular support for the army, the party and the state.

“After World War II ends, Russia realized it had to rebuild,” said Lassin. “But what exactly did the Soviet Union stand for? The war was so universal and so devastating that it had become a national unifying agent the government used as state control.”

Stalin’s death in the early 1950s allowed for a re-assessment of who won the war. “This was a time period that gave credit to the people and the Red Army,” described Lassin. Historically, it’s known as the Thaw Period. This allowed for some freedom of information in the media, arts and culture. Filmmakers and writers enjoyed a climate where they could express themselves, including first-hand accounts of the war with films such as “Ballad of a Soldier” and “In the Trenches of Stalingrad.”

Throughout the mid-60s, 70s and 80s, a sagging economy attracted leaders to return to the war mythology of World War II – a perfect story to unify and maintain the loyalty of the population. The Soviets “canonized” the war and May 9 – Victory Day –  once again became a state holiday complete with a 20th anniversary celebration parade on the Red Square.

“One of the most important ideas that the state imprinted upon the Soviet consciousness was the unbreakable link between the people and the Party when speaking of the war,” he writes.

Fast track to the Russian Federation today under President Vladimir Putin. The myth of World War II is still being used, explains Lassin, and is a key part of Putin’s policy. Perhaps the most obvious use of Victory Day for the purposes of the state’s agenda is the linkage of World War II to the war on terror.

“At the end of a montage of documentary images from the war, the producers placed images of the 9/11 attacks,” Lassin writes. “Throughout the day television announcers drew parallels between fighting against Hitler and fighting against Chechen terrorists within Russia.”

Then there’s the Internet. It offers a new platform for people to discuss their views on the war. The state-sponsored website Iremember.ru contains a wealth of information about World War II from oral histories of veterans to war film critiques.

The Putin Administration controls most of the important media outlets, said Lassin, including the new media landscape such as Russia Today, an international news outlet.

“The administration knows it has to work here (the Internet) to maintain control,” said Lassin. “And a lot of people still want to tell the story a certain way – the way they believe it.”

Lassin, who was slated to graduate in 2012, still has one more year to complete at William & Mary. That’s because in May he learned he was the recipient of a Boren Scholarship, funded by the Department of Defense. He’ll spend a year in Russia as an undergraduate student and continue studying Russian while interning at a local television station.

After his stint in Russia, Lassin is heading to Yale University where he’s been accepted to attend graduate school (he’s deferred for a year). He’ll be working on a Ph.D. in Slavic literature and culture.

Oddly enough, his love for Russian media, culture and politics happened accidentally, admits Lassin. He wanted to take a course in German, but it was full. So he opted for Russian instead.

Now he’s captured a worldwide audience thanks to one little tweet.