Digging through the details left behind and imagining the people who left them was the first part.

Decoding the stories they didn’t tell, and how to honor the past while looking to the future, was the other piece.

All of that allowed a group of faculty and students to craft William & Mary’s unique upcoming theatrical production “… & Mary,” which will be performed at the Wren Building April 17-20 at 8 p.m. The devised theatre piece was written and created this semester as part of W&M’s commemoration of 100 years of coeducation.

“The audience will be surprised by the uniqueness of ‘… & Mary,’” said history major Olivia Wilson ’21, one of two dramaturgs and a deviser, as well as cast member. “It is not a normal theatre production, but rather an experience which requires the audience to engage with the material and be a part of the history. As they are led around the Wren Building, audiences may be surprised at the boundaries we push and topics we tackle, which will hopefully make them ponder the commemoration of the first 24 women.” 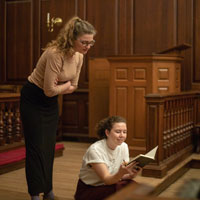 The result is a journey not only through the historic spaces of the Wren Building but through the 1918-19 time frame when the first women enrolled at W&M and on into the future generations of students to come. The performance includes puppetry, dance, physical theatre, dance and intriguing dramatic encounters.

“Audiences can expect a really immersive theatrical experience,” Pamment said. “We chose the Wren site obviously because of its layered histories. So we have the audience moving around in different spaces of the Wren, and the piece itself is very much created vis-a-vis archive, students’ creative imaginings and the site itself.”

Two students working on independent study projects with Pamment began the research for the project, digging through university archives for details on coeducation in 1918-19. The class continued that work as they sought not only to re-imagine those first female students, but to look at other aspects of the time period as well.

“We studied student diary entries, yearbooks, Flat Hat editions, photos, poetry, news cuttings of the period and bits of official documentation,” Pamment said. “Then we began asking questions of who were these women? What kind of backgrounds did they come from? How was it being the so-called ‘firsts’ in 1918?”

The devisers delved into looking at who gets left out of the narrative, in one example examining a photo found in one student’s diary of an African-American woman with the words “Maria the maid.”

Rather than attempting an “authentic” historical enactment and reproducing the same biases of history, students have been encouraged to creatively interpret historical sources, Pamment said.

“Right now in 2019, what do we learn by looking back?” she said. “And which aspects of this do we want to pick up and play with in order to imagine and re-imagine the future? So we look backwards to look forwards in this piece.” 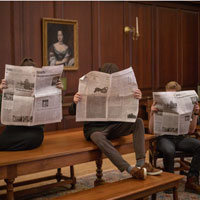 The project involved many exercises designed to mine potential ideas, and the entire group worked on what to incorporate and how, according to Pamment. Copious access to the Wren Building granted by Executive Director Susan Kern was invaluable to using the space both to create and perform.

“So this has been a really collaborative journey between students and faculty, making a piece from the ground up, with the students developing the piece through improvisation and trying to make decisions as collectively as possible,” Pamment said.

Wilson said the group’s hard work and openness to hear out ideas allowed for creativity to blossom and for the show to come into its own.

“Part of working on a creative piece from scratch, such as ‘... & Mary,’ is learning to let the process be chaotic because that is when the best things happen,” Wilson said.

“My favorite part of the show is the ending. I won't give away any spoilers, but the conclusion gives closure in a moment of unity while also looking forward to the next hundred years of women at William & Mary.”