Robert Davidson was college-aged when he made “an innocent gesture,” a gesture that he had no idea would ripple from his Canadian hometown throughout the world, changing the course of his people and the art of the world.

Davidson, today an internationally recognized Haida artist and activist, was 22 when he carved and raised the first totem pole his hometown of Masset on Haida Gwaii had seen in 90 years, dedicated to the “sadness of the elders.” The artwork sparked the beginning of a renaissance of the First Nations Haida culture and the art of the Pacific Northwest.

Davidson will appear at 5 p.m. on Wednesday, March 23, in the William & Mary Sadler Center Commonwealth Auditorium to present “An Innocent Gesture,” a talk that is free and open to the public.

Just as that first totem pole carried a significance beyond its original intent, so does Davidson’s visit mark a new welcoming at W&M, as its faculty consciously and deliberately opens the door to the world through the new general education college curriculum, or COLL.

The COLL curriculum comprises about a quarter of the 120 credits needed for an undergraduate degree, with its courses taken alongside electives and the classes required for majors. The first-year COLL 100 courses focus on “great questions” and in-depth research and communication, the second-year COLL 200s on academic disciplines and the third-year COLL 300s on “W&M in the World,” global and cross-cultural understanding.

Davidson’s three-day visit is part of a Center for the Liberal Arts pilot program to develop the on-campus COLL 300 courses, which will be formally implemented in the fall of 2017.

Bringing the world to W&M

“By the time students are here for their third year, they are pretty much settled in,” said Gene Tracy, Chancellor Professor of Physics and Center for the Liberal Arts director. “They think they know how to navigate the academic world. The idea of COLL 300 is to shake it up again.”

COLL 300 experiences are designed to join students with people, places and ideas that lift them out of their familiar surroundings and deepen the way they see themselves in the world. Students can fulfill COLL 300 through study-abroad, study-away or on-campus programs.

On campus, COLL 300 will invite three high-profile visitors to William & Mary every semester, guided by a faculty-chosen theme. COLL 300 courses will be built around the theme and engage with the visitors during their stay.

This semester, the pilot theme is “Unrest.” Davidson was suggested as the visitor by Chemistry Professor and CLA Fellow Carey Bagdassarian, who has long held an interest in the art, iconography and stories of the Pacific Northwest. 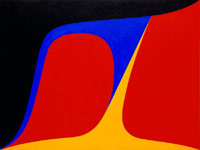 “We were thinking about non-academics’ lived lives, shared lives, unrest and discomfort,” Bagdassarian said. “Well, so much about Haida culture is completely different from our Western way of thinking.”

Through his life’s work, Davidson confronted the treatment of Canada’s indigenous cultures and inspired innovation in all forms of artistic expression, including singing and dance. Creatively, he mastered first the traditional forms of classical Haida art and then “took them to a level of abstraction never before seen,” Bagdassarian said. Politically, Davidson has been involved in the First Nations’ land rights campaigns.

Danielle Moretti-Langholtz, director of the American Indian Resource Center and research assistant professor of anthropology, lived for five years in Juneau, Alaska, where she soaked up the history and culture of the Tlingit and Haida people.

“In Robert Davidson's exquisite artwork we can see the fullest expressions of both traditional Northwest Coast art and the evolution of the purest forms of design elements which embody stories of community identity and cultural resilience,” she said.

The Center for the Liberal Arts is running three pilot COLL 300s this semester. Each of the one-credit pilots are titled The Idea of the University, and subtitled to explore the learning community from different angles.

Tracy co-teaches a COLL 300 with English Professor and CLA Fellow Deborah Morse, exploring how the university is represented in fiction, film and other forms of the imagination. Bagdassarian and Hispanic Studies Professor Teresa Longo are teaching a COLL 300 that considers a plurality of voices in education, with a focus on indigenous Pacific Northwest and Mexican cultures. Associate Professor of History Paul Mapp’s COLL 300 considers the nature of the university over centuries. 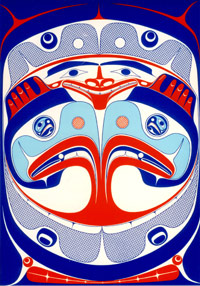 Each COLL 300 also engages with the semester’s theme and campus visitors from a global perspective, Tracy said.

“We can ensure the new curriculum remains innovative because of that constant stirring of the pot,” Tracy said. “I think of faculty teaching in that part of the new curriculum as playing jazz rather than classical music. To keep the COLL 300 designation for a course, they are going to have to keep shifting the focus a little bit to stay aligned with these themes and these visitors who are coming in.”

Additional faculty – who aren’t running pilot COLL 300 courses – have responded to Davidson’s visit by integrating his work into their classes in a broad range of disciplines.

Michael Gaynes in art and art history has referenced Davidson in Perceptions of Time, while Professor Bill Fisher has worked Davidson into Introduction to Cultural Anthropology.

Students from those classes will all have an opportunity to interact with Davidson in small groups in addition to attending the event Wednesday night. All told, more than 300 students will have a chance to meet the artist.

“His visit to our campus will give all of us – regardless of our personal academic interests – the opportunity to learn from a master artist,” Moretti-Langholtz said. “He has much to teach us, if we are willing to look and listen.”