But he goes front and center this month in “Odd Job,” a one-man show of his artwork being displayed in the Andrews Gallery. A reception will be held at 4 p.m. on Thursday, March 17.

“Michael has a remarkable ability to bridge several worlds simultaneously,” said Elizabeth Mead, art and art history department chair. “I think this comes through in his work on exhibit in the Andrews Gallery. He is a serious furniture maker steeped in traditions of woodworking on the one hand and on the other, his pieces possess great wit, animation and gesture.”

Draeger describes his position as studio art technician, which he’s held since fall 2014, as “essentially a librarian for the art studio, sculpture studio, the wood and metal shop,” but the job encompasses a lot of different activities. He’s the go-to guy for students looking to create what they envision, but at the same time, he has a state credit card for department purchases and is thinking about how to build classroom furniture more cheaply than the industrial supply store sells it.

“Part of the reason I called this exhibition ‘Odd Job’ is because I dance with a lot of different tasks and different requirements, from making something for aesthetic pleasure to, for whatever reason, we’ll need some shelving to go up in a classroom or a table to be built,” he said. “If I can make them visually pleasing, that’s wonderful. But at the end of the day, they just need to serve as a table or shelves.”

That mix of creativity and practicality infuses his own artwork, which includes furniture, drawings and small wooden works, all of which tie back to his appreciation of the natural world.

“The physical forms that occur from our world through natural processes are just unbelievable,” he said. “Taking a closer look at the more mundane of the world’s sculptures – like rocks, seeds, bones – you notice the physical beauty. I’m always building an inventory of these forms for their architectural, structural or sheer aesthetic qualities and referring back to them for inspiration.” 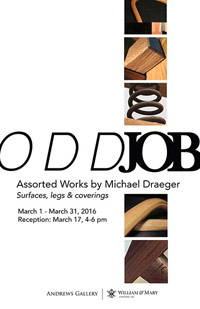 A Virginia Beach native, Draeger said he was influenced by his father’s work in construction before he majored in industrial design at James Madison University, where he also took a job overseeing the school’s art studio. After graduating, he moved to Albuquerque, New Mexico, and began working in commercial carpentry. But even there, his artistic proclivities rose to the surface. He couldn’t resist taking scrap wood home, even though his coworkers thought him odd.

“I would be like, ‘Wow, I can’t believe that. How are they just disregarding all this material, all of these cool things? This piece of wood is so gorgeous, and we’re just tossing it in the trash,’” he said. “I was the only one in this world who felt like that.”

He said he was attracted to the studio art technician position at W&M in part because he would no longer be the only person who felt like that. It promised him an opportunity to develop his skills and artwork in a creative environment.

“The students, they are the most rich river of creativity,” he said. “They’ll come at me with the strangest requests of things I wouldn’t normally think to do in my own work, wanting to make some outrageous cuts or using the equipment past the parameters I would originally set for them. Because they are unfamiliar with the commercial aspects of this equipment, these materials, they aren’t hindered by it. They are in a world all of their own and forging ahead, being their own vanguard. Every day they have something new for me to do, and it keeps this job very interesting.”