As a journalist does, Jodi Kantor asked questions as well as answered them during her visit to an Introduction to Gender, Sexuality, and Women’s Studies class Tuesday morning at William & Mary.

Kantor, W&M’s 2018 Hunter B. Andrews Fellow in American Politics, was on campus Monday and Tuesday to meet with faculty, staff and students and gave a public lecture Monday evening. Her visit was part of the university’s yearlong commemoration of 100 years of coeducation at W&M.

Kantor is a correspondent for The New York Times. She began her journalism career at Slate in 1998 and became the arts and leisure editor of The New York Times four years later. She covered the Obama family extensively beginning in 2007 and wrote a book, The Obamas, about them in 2012.

In 2018, Kantor received a Pulitzer Prize in Public Service along with her NYT colleague Megan Twohey for their investigative reporting on media mogul Harvey Weinstein’s alleged sexual assault misconduct over several decades. Their work helped spark an international effort to identify perpetrators in other positions of power, and to ignite the #MeToo movement, shift attitudes and spur new laws, policies and standards of accountability around the globe. 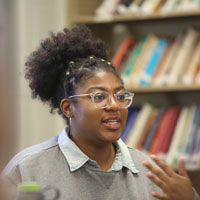 A student asked about the idea of reporting on the private lives of public figures, referencing the upcoming movie “The Front Runner” about Gary Hart’s political career being derailed in the 1980s by the public reporting of an extramarital affair. Kantor said that the old idea that has now fallen out of favor in the #MeToo era, but is still important, is that you don’t report on people’s private lives without a reason.

“We are not a gossip publication,” Kantor said. “We report in the public interest, and we still have the passion and belief that people are entitled to some privacy, especially in the bedroom.”

She said the key is to determine relevance, does it bear on how the candidate does his or her job?

“It’s become more complicated in the era of #MeToo,” Kantor said. “Because what we see in a lot of these stories, especially in the Weinstein case, is that people did not identify abuse correctly because they categorized it in their own minds as an extramarital affair. …

“Also part of what I think remains extremely unresolved about the #MeToo conversation is that we haven’t really decided as a society whether we’re wholly focused on workplace behaviors or private behaviors, or both. And what I mean by that is that a lot of our work, the Weinstein work, was about workplace sexual harassment. And that, for a news organization, is fair game.” 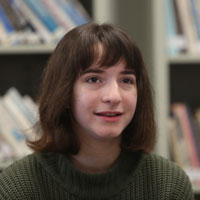 She asked students why that is not considered a violation of privacy, and they answered that workplace behavior involves possible abuse of power.

“But when it comes to something in the private sphere, it’s a lot less clear,” Kantor said.

She said that everything from domestic violence in popular entertainment to the idea that rape can occur within marriage is part of the spectrum in question.

“It’s complicated, and I think that part of what we need to stand for as journalists is a nuanced view of how to cover these issues that balances the kind of aggressive pursuit of the truth that’s valued in journalism with a sense of restraint and respect towards people, and a feeling that we do understand that reporting on people’s sex lives is incredibly delicate,” Kantor said.

On a more personal level, a student asked Kantor about her decision to drop out of Harvard Law School to pursue journalism.

“You have to evaluate a potential career really based on what you spend your time doing because your life is ultimately made up of these moments of it’s 10 o’clock on a Tuesday morning, and what are you actually doing with your time,” Kantor said. “And I discovered that I hated a lot of the things that lawyers have to do, like sitting around and checking citations or carefully writing the same dry brief over 50 times —I just wasn’t interested in.

“And I realized that I had never really had the courage to try journalism and that I had to do it before I faced a less happy life in the law.”

Now working on a book with Twohey about the Weinstein investigation and the questions it raised, Kantor said the two women feel “more called to represent.”

“We decided to do the book because if 100 college students decide to go into journalism after reading this book, all of the work on the book will have been worth it,” she said.