William & Mary Assistant Italian Studies Professor Monica Seger grew up in the city but is drawn to the outdoors. So as a young Italian studies scholar, she found herself drawn to representations of the natural world in the Italian texts she studied. Her interest was so strong, she said, that eventually her doctoral advisor steered her back to the English department, to study ecocriticism.

She embraced ecocriticism, successfully integrating it with Italian studies. In January, University of Toronto Press published her first book, Landscapes in Between: Environmental Change in Modern Italian Literature and Film, called an “important contribution to the growing internationalization of ecocriticism,” by Patrick Barron, reviewer and University of Massachusetts Boston English professor.

In it, Seger examines the works of five Italian authors and filmmakers, looking closely at how they represent the rapidly changing and forever-altered landscapes of contemporary Italy.

Too often, art reflects an idealized vision of Italy – rolling hillsides, idyllic townships – with “nary an industrial drainpipe in sight,” Seger notes.

But Italy underwent a dramatic transformation after World War II, an economic boom marked by swells of economically-driven migration, unchecked development, industrialization and urban sprawl that pressed into the countryside. Since the 1950s, Italy has been subject not only to profound cultural shifts, but monumental changes in how Italians relate to the land itself.

Seger is interested in how five artists in particular – Italo Calvino, Pier Paolo Pasolini, Gianni Celati, Simona Vinci and the filmmaking duo Daniele Ciprí and Franco Maresco – responded. “One of the crucial functions of imaginative texts is their ability to reflect the world – in all its complications – to audiences, so that they may begin to make sense of it,” Seger writes in her introduction. 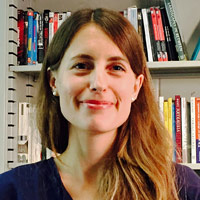 It is in “landscapes in between,” in interstitial landscapes that are neither wholly synthetic nor entirely wild (think an abandoned factory that is being reclaimed by the land or beds of roadside wildflowers), that Seger finds the common thread that knits together the five artists.

Starting in the 1950s, with Calvino’s earliest fiction, Seger traces the arc of attitudes toward a landscape that is permanently altered but that still offers at least a limited experience of nature.

“The mixed attitudes expressed within these texts, something between bitter acceptance of the ‘new ugliness’ of the urban and a fragile hope for contact with an adapted nature, show Calvino to be engaged in a still-unfolding intellectual process, setting the stage for those to come,” she writes.

In the years since, Seger found a gradual “environmental reckoning” in the five artists, even as Italy’s natural spaces became more neglected and degraded. In the most contemporary authors and filmmakers, there is an almost complete acceptance of, and appreciation for, the fractured landscape.

“The idea of working with the material at hand, of coping and coming to terms is very intriguing, especially regarding the natural environment,” she said. “I do think part of that has to do with having grown up in a changed landscape, in a contemporary world, in which we can’t avoid the impacts of industrial pollution and climate change. But then also acknowledging that there’s something [of the wild] still there. There’s still a natural world to work with.

“In those interstitial spaces, one can feel the energy that comes from being out in nature and the wild,” she continued. “You can smell the fresh air, you can see the plants and you can take whatever it is one takes from that, while also realizing that you might still have one foot in a more urban world, in the worlds of transport and commerce.”

In that way, the Italian artists are pivotal in developing “an ethics of coping” with environmental degradation. It’s an ethic particular to Italy, she said, or at least it stands in contrast to America in its development. Italy does not share the American frontier ideal or have a literary tradition of nature writing exalting the wild, unspoiled by human machination, she said.

But she agreed that the attitude might prove useful as the world grapples with the effects of climate change.

“I’m really an advocate for turning to the humanities as a way to consider contemporary world problems,” she said. “I think the artist … can offer all of us a way to step back from the realities in which we’re living and to then reconsider them through a new representation. Literary and cinematic texts can offer alternative models for moving forward, for addressing our relationship to the natural world.

“I think particularly in Vinci’s work, we see an acceptance of the nature that remains and a move to pay attention to what is there in the landscape – although it may have already been changed – and to nurture the relationship that’s still possible.”

Today, Seger’s scholarship is going in a different direction, though it still centers on a changing Italian environment. Her current book-in-progress considers dioxins, a group of invisible, highly persistent, toxic chemical compounds associated with industrialization. She launches from the 1976 Seveso chemical plant disaster.

“For me, the big question is how do we represent imperceptible change?” Seger said. “I’m really looking at narrative studies and work dealing with telling the story of what happens in the lived world, how to tell that story when we can’t see what’s happening.”