Must reason override passion to allow for rational action?

William & Mary Philosophy Professor Elizabeth Radcliffe’s new book says both are necessary, supporting the theory of 18th-century philosopher David Hume and disagreeing with those who argue against him.

In Hume, Passion, and Action, which was published in June, Radcliffe contends that Hume is right to argue that passion and reason are not opposing, but rather both are necessary to fuel people’s motivation.

The book follows on Radcliffe’s previous work on Hume, which up until now has been on his theory of morality. His views on morality are tied to his theory of the passions, so the new book is a natural progression in her research, Radcliffe said. She framed the book within the context of contemporary motivational psychology, which she said Hume has greatly influenced.

W&M News asked her to discuss a few of the book’s main points.

How did you choose this topic?

There’s a key issue that I wanted to address in the book that’s been on my mind for years.

Hume gives us a theory of motivation that in contemporary philosophy is called the Humean theory of motivation — that in order to have a motive to action, a person has to have both a belief and a desire. The competing model, the rationalist model, says you don’t need desire and can come to conclusions based on reason alone both about what you ought to do and how to achieve it.

And so there are these two competing models of motivation. These are in discussion and in debate in contemporary philosophy.

The Humean model of course is the one that everyone says Hume inspired. He gives detailed arguments why we should look at motivation in that way rather than in the rationalist way. At least, I believe that’s the case.

But there have been a series of Hume commentators in contemporary philosophy who argue that Hume wasn’t saying this at all; he wasn’t saying that one has to have a belief and a desire to produce action.

And they try to show, both by examples and in terms of theory, that if I, for example, believe it’s raining, that belief will motivate me to take an umbrella. I don’t need any desire — not even the desire to stay dry; there’s no other affective state that I need to get me to action. These commentators also argue that Hume never meant to put forward the belief-desire model.

Well, I think they’re wrong. I argue that the traditional way of looking at the issue is the proper way. And my book spends a lot of time on Hume’s texts, trying to show at least what I think he meant when he put forward his claims about motivation. I defend the traditional way of looking at the matter, which gives backing to the contemporary Humean theory of motivation.

What is new here?

I have a chapter in the book on what I call motivational dynamics, how various passions opposed to each other in certain respects, like fear and joy, can interact and produce new passions, or how they might temper each other. I discuss how certain passions that make our lives difficult, like anxiety, frequent disappointment, sadness could be tempered by other passions.

And so I find within Hume’s theory an account of how we can live better, too.

What can we learn from this?

Actually, I think that a lot of the things Hume says about what the 18th-century philosophers called “regulation” of the passions, keeping them in moderation, could be applicable to us.

These are simple points, but they ring true. For instance, if you could concentrate on your competitors’ good features rather than their bad features, you might not feel resentment so strongly. He talks about, for example, two principles — features of human nature — that he thinks everyone possesses.

The two principles are sympathy and comparison. Sympathy is the ability to take on other people’s feelings, what we’d probably call empathy. Comparison produces the feelings that are evoked in you when you start comparing yourself to other people. 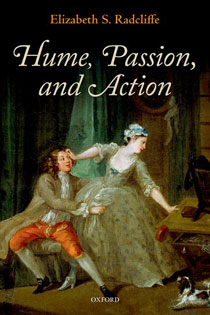 Comparison often yields negative feelings. For sympathy, it depends. If you’re sympathizing with someone and they’re in distress, you’re actually going to feel distressed. But it could also produce emotions in you that prompt you to help them.

So sympathy is generally thought of as a positive sort of principle and comparison a negative one.

The reason I bring that up is you asked what we take away from this study that could help us deal with our own situations, either positive or negative. If we’re aware that there’s this tendency in human nature to compare ourselves to other people, and we, as a result of that, feel jealousy or envy, we can try to counteract that tendency by doing a couple of things.

One is to focus on others’ positive rather than negative features. But another is to think about our own accomplishments and try to put them into perspective and produce a sense of proper pride — Hume talks a lot about pride — in what we have accomplished, so that comparison doesn’t affect us as intensely.

Now all this seems really simple, but what Hume really emphasizes are habits of mind. We have to make this habitual. If it’s not habitual, it’s obviously much, much harder to achieve.

He actually thinks that we can divide our passions into the calm and the violent passions. That sounds kind of odd. But he thinks some of the passions are calm ones, and they are the ones that lead to a better life if we can make them predominant in our lives.

So among calm passions would be benevolence, kindness to children and moral and aesthetic pleasures. We take pleasure in beauty, take pleasure in other people’s good character. They’re calm, by the way, because he says they don’t involve internal upheaval. If we could cultivate those, our lives go better.

The violent passions like resentment and anger are the ones that are accompanied with a great deal of internal upheaval. And when those are dominant in us, well, obviously we’re going to be in psychological turmoil.

And if we want to avoid that, we have to work on cultivating habits such that the calm passions become dominant in us.

So Hume offers this whole theory of the passions, a psychological theory that I do think resonates with contemporary psychology.

And the flip side of that?

I think it’s clear that he believes that some of us just run up against our limits and sometimes you just can’t do anything about who you are. This is because he really does think that our emotions are rooted in individual constitutions.

Even though we have a shared human nature, you and I have different things that appeal to us, either due to heredity, biology, upbringing, just the way that we are made.

Some things are harder for me and are easier for you. And some things appeal to you and they don’t appeal to me. And we have to deal with that on an individual basis. And I think that his view implies that some people simply are going to have a hard time dealing with what is called self-regulation in the literature.

Hume has a theory that explains emotions, motivation, behavior and well-being that appear to me to be common sense. His theory nicely inter-weaves them in a systematic way to produce a picture of human nature.