Faculty member Philip Swenson and Dustin Crummett ’12 were never at William & Mary at the same time, but their connection has now been forged in print.

Swenson, an assistant professor of philosophy at W&M since the fall of 2017, met Crummett while the two were at Notre Dame a few years back. Later, they ran into each other at a conference and started discussing their thoughts on a certain argument on gun control and self-defense.

That conversation resulted in their co-authored paper, “Gun Control, the Right to Self-Defense, and Reasonable Beneficence to All,” which was recently published in the philosophy journal Ergo.

Crummett earned his Ph.D. from Notre Dame in 2018 and is now a postdoctoral researcher at the Ludwig Maximilian University of Munich. He works on animal ethics as part of a European Research Council project on animals in the philosophy of the Islamic world. 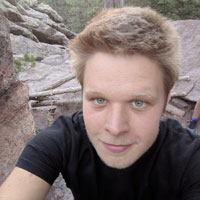 “Philip had been thinking about an argument from Caspar Hare, a philosopher at MIT, and how it might undermine an argument against gun control, which has been defended by Michael Huemer and some other people,” Crummett said.

“Huemer's argument is supposed to show, roughly, that gun control violates the individual's right to self-defense, even if it saves lives on balance. I suggested that we co-author a paper about it, so we did. We presented it at the American Philosophical Association Central Division meeting in Chicago in 2018, as well as at the Rocky Mountain Ethics Congress that year.”

Huemer’s argument claims that even if a particular gun control measure has good results overall, it infringes, in a manner which is prima facie seriously wrong, the rights of those who end up being killed or significantly harmed due to their resultant inability to defend themselves, according to the paper’s abstract.

“We claim that uncertainty on the part of the government about who will be harmed by a particular gun control measure underwrites a strong response to this argument,” it continues.

“If gun control measures save lives on balance, then they may increase each person’s chance of remaining safe relative to the information available to the government, even if they will cause some people to be harmed who otherwise would not have been.”

Swenson had connected some of his reading on the self-defense argument against gun control with Hare’s writings on examples of people having to make decisions without knowing beforehand whom they’re saving and whom they are killing, he said.

“There’s this argument against gun control that goes like this: Look, even if say, some gun control policy would save more lives overall, that doesn’t mean it would be OK to do because you might still be violating important rights,” Swenson said. “And the right to self-defense might be one of those very important rights.”

Swenson gave an example where a person being attacked by a mob armed with baseball bats has their gun grabbed from their hands, leaving them defenseless. He likens that to the government implementing a restrictive gun control policy that would keep people from having firearms at the ready, Swenson said.

The pair took it a step further.

“The idea Dustin and I were trying to develop is that in particular types of cases where you’re acting in everyone’s best interest given your information at the time, you don’t have to worry about rights in the same sort of way,” Swenson said.

He gave an example of a doctor trying to decide about giving a patient a treatment with a 90% chance of saving his or her life, or a 10% chance an adverse reaction would be fatal. Most would agree that the overriding factor of survival precludes worrying about violating rights.

“So in cases where you’re acting in everyone’s best interests or the people involved’s best interests, you can sort of ignore this risk of violating their rights,” Swenson said.

The authors argue that the same is true with gun control; the government can consider beforehand what gives each person the best chance to survive. Though a very few might not survive because they won’t have a weapon at hand when needed to avoid dire peril, for most it will be best not to have it available.