Professor talks about philosophy in relation to colors in new book.

Josh Gert, Leslie and Naomi Legum Distinguished Professor of Philosophy at William & Mary, explores an original account of color properties and our perception of them in his new book, Primitive Colors.

Gert is teaching a new seminar course on perception this semester, which goes beyond color but is a topic he got into as a result of his work with color. He started getting interested in color in 2005 in relation to his other main area of work, which is value theory.

“Color is either in the mind or it’s not,” Gert said. “And people may think one of those options is the obviously correct one. They may think they agree or have same view until they start talking about it.”

A real philosophical interest in color with academic research and books being published didn’t start until the mid to late 1980s, making it very new in the history of philosophy, and has proliferated since, according to Gert.

W&M News asked him to discuss a few of the book’s focal points.

Are color properties and perception of them the central topic you are exploring?

Yes, the goal of the book really is just to answer the question: What are the colors? What is their nature? Are they reducible to physical stuff?

A lot of the book is addressing rival views that seem to philosophers more appealing. One very appealing view, which seems to me to be an inadequate view but very appealing, is that colors are just dispositions to reflect light in a certain way. People who want to have a simple, science-based view of the world are very drawn to that kind of “reflectance physicalism,” as they call it, about colors.

But one big problem with that view is that it turns out that very, very different reflectance patterns look identical to human beings. Philosophers who want to reduce colors to other things, like reflectances, have a bazillion ways of trying to deal with that issue. I don’t think that any of them really work.

The book does a lot of arguing in favor of a simpler view than reflectance physicalism or dispositionalism. The problem with the simpler view is that it adds to what we have to acknowledge as parts of the world. On my view, one part of the world is made up of the colors of objects. They’re not the same thing as reflectance patterns, and they’re not the same things as dispositions to cause experiences in people.

Can you explain how psychology intersects with philosophy in your work?

It’s tricky how to identify the colors. Before you can try to figure out what’s the essential nature of the color red, you need some way to get a hold on it and start studying it, right?

One way of trying to do it is to say, oh, red is the stuff that everybody calls “red.” So you don’t have to know exactly what it is, in terms of its essence. But you could go around and ask 100 people, and 98 people say: “Oh, that’s red.” Then we can figure out, well, let’s look at its reflectance pattern, maybe that’s what red is. Let’s look at its effect on these people, or whatever. 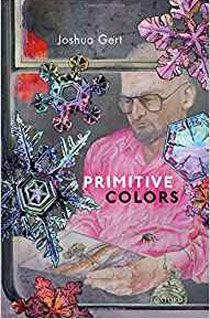 That’s using verbal behavior as a way of getting a hold of the thing. But it’s also the case that you could think, you know red is whatever property out there is the cause of certain kind of experience that I have, even if I never speak. So the important thing might not be the language that you use to pick out. It might be the subjective experiences that you should use. Psychology can help make it clear how these two ways of picking out the colors are different.

Can you explain the difference between objective color and color appearance?

Take this shirt. If you look at it, it should be pretty obvious that it’s all black. It’s all the same black. But it looks pretty different in different places. Here it looks lighter, here looks darker. Appearance is what allows you to tell that it is wrinkled, right? If there weren’t changes in the appearance, you couldn’t tell it was wrinkled.

So the appearance really changes — drastically. But also, you can just glance at this shirt and know it’s all one color. So your eyes are telling you one color, but your eyes are also registering very different appearances that allow you to see it as wrinkled. And the difference between a color and its appearance is that difference.

Well, I do have something to say about the color appearance, but my theory is really a theory of objective color. Look, this has got one color, what is it? Its black. What is black? It’s a primitive property.

What are the main takeaways?

But also there is a particular method that I use in the book that gives that conclusion. One of the things I really would like actual philosophers who read the book to take away also is an appreciation of the application of a philosophical method that’s not very well-represented at the moment in contemporary philosophy, which is focusing on language.

I don’t expect very many people to read the book who aren’t professional philosophers. But one thing you might take away if it was the first philosophy book that you read that was really for academics is that this topic, that you might have thought was so simple, is in fact incredibly complex.

And the more you think about it, the more questions get raised. Questions about all sorts of stuff that you might never have thought of as so closely related. Like I was talking about the relation between language and experience, and the relation between science and everyday objects. All that stuff, it comes out.