The following article originally appeared in the spring 2016 issue of the W&M Alumni Magazine - Ed.

It’s hard to define Brian Goebel ’93, J.D. ’96. His résumé is so diverse — youth baseball coach, entrepreneur, father, blogger, husband, chairman — that it’s hard to get a clear picture of just who Goebel really is.

After talking to Goebel, however, it becomes very clear. Goebel is defined by the American dream. 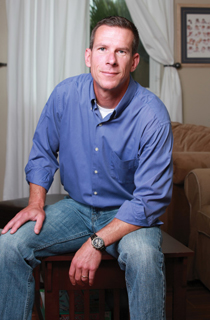 Goebel brings new ardor to the expression “you create your own destiny.” He currently juggles three different jobs, all of which are of his own creation and all of which stem from Goebel’s core mission — to forge a stronger nation.

At the helm of Goebel’s career is his latest creation, 2040matters.com, a non-partisan political blog that highlights the declining trend in civic engagement and offers creative alternatives for political problem solving. An avid proponent of generational justice and civic engagement, Goebel founded 2040 Matters with the ultimate goal of protecting the American dream for Generation X+ and subsequent generations.

“When so many people choose not to participate in the affairs of our government, it creates the possibility that the government really isn’t serving the interests of the majority or that it might be missing perspectives that could help it make better policies and better judgments,” Goebel says. “That has always concerned me.”

And 2040 Matters is just the beginning. Looking to the future, Goebel has already begun developing the next step in his aim to preserve the American dream — the forming of a 501(c)(4) social welfare organization in Santa Barbara, California, called Reason in Government. A natural complement to 2040 Matters, the new organization will focus on developing and publicizing policy positions that would advance more reasoned, effective and efficient government.

“The conditions that allowed the American dream to be realized for past generations, I think, are being eroded steadily,” Goebel says. “I’m concerned about it, and I think young people should be concerned about it as well. The way to address this is through increased civic engagement, being a more informed participant in the civic process and really understanding the long-term implications of policy choices that we make today.”

Goebel’s interest in government dates back to his time at the university, where he was a government and philosophy double major. After graduating in 1993, Goebel enrolled in William & Mary Law School.

“The rigor of the William & Mary undergraduate education prepared me enormously well for law school,” Goebel says. “I was prepared for the workload, the analytical rigor and the challenge of the professors in a way that very few of my classmates were.”

His hard work resulted in prestigious merits such as obtaining a position as an articles editor on the William & Mary Law Review and induction into the legal honor society, the Order of the Coif.

When the time came to leave William & Mary, Goebel dove headfirst into the legal world. Ultimately, Goebel joined the legal firm Gibson, Dunn & Crutcher in Los Angeles, the job that would begin his journey down the path to public service.

It was at Gibson, Dunn & Crutcher that Goebel met Robert C. Bonner, who would eventually serve as the Senate-confirmed commissioner of U.S. Customs and Border Protection (CBP). In September 2001, Goebel joined Bonner as his counselor and senior policy advisor. In this position, Goebel worked to advise the commissioner on a wide range of border security and management policies, strategies and operations.

Goebel’s transition from the legal world to public service, however, was anything but smooth. He joined U.S. Customs right in the aftermath of the Sept. 11 terror attacks — starting work on Sept. 12 — and helped to aid Bonner through the expansion of U.S. Customs into the CBP and transition from the U.S. Department of the Treasury into the newly formed U.S. Department of Homeland Security in 2003. Goebel stayed with the CBP until 2004.

“After working somewhere between 65- and 90- hour weeks on average for the better part of three years, I decided that I needed a break,” Goebel says. “My daughter was about 16 months old at the time, and I wanted to be home more to spend some time with her and basically just recharge the batteries.”

The break, however, was short-lived. His three years in public service and with homeland security stuck with Goebel long after he left the CBP, and inspired him to branch out on his own and launch his very first entrepreneurial venture.

In August 2005, Goebel founded The Sentinel HS Group, LLC, a strategic consulting firm specializing in homeland security expertise, consulting and data analytics services, which was later divided into three operational subsidiaries and a holding company. Today, Goebel continues working as chairman of the board of managers for the two remaining Sentinel businesses, which he manages from his home in Santa Barbara.

At the end of the day, Goebel’s many diverse ventures and interests boil down to one fundamental charge — creating a better America for future generations by taking action in government today. No one says it better than Goebel himself as he proclaims his mantra on the page of 2040matters.com that he aptly titled “Duty Calls.”

“Those of us who care about our children, our country and the American dream have a moral and civic duty to leave the country in better shape than we found it. We are in danger of breaching this duty if we do not solve the key challenges facing the U.S. over the next 25 years — challenges that if left unaddressed, will result in a less secure, prosperous, civil and optimistic country.”