Nine William & Mary students will be commissioned as U.S. Army officers in a ceremony to be held at the university May 15.

Brig. Gen. (promotable) Edward M. Daly, deputy chief of staff for U.S. Army Materiel Command, will speak at the event, which begins at 12:30 p.m. in the Sadler Center’s Commonwealth Auditorium. A reception will follow. 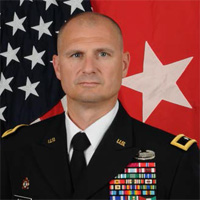 William & Mary Chancellor and former Secretary of Defense Robert M. Gates ’65 will also be in attendance, as will President Taylor Reveley and Lt. Col. James M. Kimbrough, chair of the university’s Department of Military Science.

“I am very proud of our commissionees for their dedication and commitment to complete the Reserve Officer Training Corps (ROTC) program on top of their rigorous academic studies at the College of William & Mary,” said Kimbrough. “By swearing to defend the constitution against all enemies, they complete their long journey to become second lieutenants in the United States Army. It will be under their leadership that our soldiers will combat the threats facing our great nation and its interests.”

The students to be commissioned are:

Daly has served in his current role with U.S. Army Materiel Command since January 2014, following a tour as special assistant to the commanding general of U.S. Army Training and Doctrine Command. Throughout his military career, which began with his own commissioning in 1987 after graduating from the U.S. Military Academy at West Point, has included participation in Operation Desert Shield/Storm, service as the International Security Assistance Force (ISAF) CJ4 in Afghanistan and later as the Chief of Staff (Forward), NATO Training Mission - Iraq (NTM-I) in support of Operation Iraqi Freedom, and several commands, including that of the 43rd Sustainment Brigade, which deployed to Afghanistan in support of Operation Enduring Freedom.

‘A time of consequence:’ Rice, Gates reflect on public service

W&M students to be commissioned as Army officers