William & Mary students who take architecture courses with Edwin Pease get the best of both worlds. They learn about design and materials for any idea they can come up with, and they get a peek into Pease’s work as a local architect.

Pease, senior lecturer in the Department of Art & Art History, has taught at W&M since 1990 while also working full-time as a partner in Stemann Pease Architecture. He literally crosses Boundary Street to get from one workplace to another, but his days include buildings and job sites too numerous to count.

“I think when I’m finished with all this, whenever that might be, I think I’m going to look back and say wow, that was so ideal in many ways,” Pease said. “I do feel that way. Like so many things in life, if I’d tried to plan this — I want to teach at a good liberal arts college that has an architecture program and I want to have an office a block away — it would never have worked. So serendipity and dumb luck come into play.”

Pease emphasized that his students aren’t for the most part art majors or don’t have backgrounds in design.

“I just kind of assume that everyone’s starting with a blank slate,” he said. “And then I just work it from there, which is a lot different from the way studios typically work in an architecture school.

“I’ve never stopped being impressed by what these students can do, most of whom have no prior experience with design. I just try to create projects that don’t tell them what to do, so they’re open-ended enough to give them some constraints to react to, to push back on.” 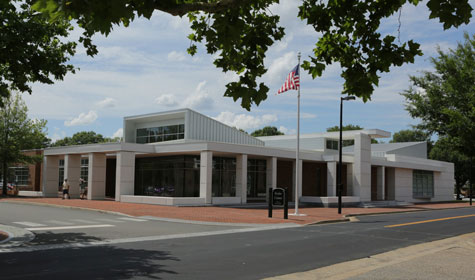 Each of Pease’s roles informs the other, and he gets high praise for the benefits to his students.

“Ed’s ability to integrate a professional field like architecture into a liberal arts curriculum is truly remarkable,” said Sibel Zandi-Sayek, associate professor and chair of the Department of Art & Art History. “With minimal means, he has developed a first rate architecture track within Art & Art History as demonstrated by the impressive list of graduate schools his students attend.”

As of last year, more than 70 of Pease’s students have gone on to obtain graduate degrees in architecture, landscape architecture, urban planning and historic preservation, she added.

“His design studios teach students how to approach problems from a holistic and synthetic perspective, and how to work in a context where different knowledge bases — art, technology, sociology, psychology, economics and history — and actors — designers, clients, users, and developers — are at play,” Zandi-Sayek said. “And, as in all creative fields, he forces them to grapple with open-ended challenges. These are important transferable skills of the kind we strive to impart on our students.” 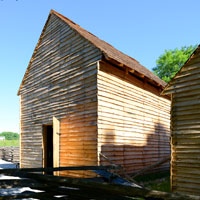 Henry Kimmelman ’21 is double majoring in government and a self-designed architecture major based largely around Pease’s classes.

“Ed is a great teacher,” Kimmelman said. “His classes are open and engaging. Ed leads them in a way that leaves room to experiment, as undergraduate students should, but also guides students in a way that makes clear his knowledge of the subject.”

Work done by Pease’s firm is prominently represented locally by the Stryker Building in downtown Williamsburg and the Historic Farmstead at the American Revolution Museum in Yorktown, both of which received design awards from the American Institute of Architects Virginia in the past two years.

In 2014, Pease co-taught with Lemon Project Director and Assistant Professor of History Jody Allen a W&M class on memorializing the people who were enslaved at W&M. That led to the current Lemon Project Committee on Memorialization’s formation and recent selection of a concept for the memorial. His firm is also serving as consulting architects for the upcoming expansion of the Muscarelle Museum of Art that will be part of The Martha Wren Briggs Center for the Visual Arts.

Allen first met Pease in 2013 when he invited her to attend his students’ final project presentations, she said.

“It was at this time that the idea of a class to initiate discussion of a memorial to the enslaved at William & Mary was born,” Allen said. “It has been my great pleasure and privilege to work with Ed over the past six years. He is a wonderful colleague and friend, and his contributions to the Lemon Project in general and to the memorial project specifically have been invaluable. “

Members of the committee on memorialization didn’t know the identities of those whose concepts they evaluated. But Pease was thrilled to find out that the one selected, “Hearth,” was submitted by one of his former students who is now an architect, William Sendor ’11.

“It was a really nice surprise to find that out,” Pease said.

Sendor is another example of a student who can’t say enough about Pease’s teaching, saying it inspired him to pursue a career in the field.

“I was fortunate to experience his ability to bring out unbridled creativity, diverse perspectives and critical discussion from all of his students,” Sendor said. “His approach was to throw out our preconceived notions and dive headfirst into the messiness of the design process. From day one, he emphasized abstraction and physically modeling our ideas by hand.

“Our studio would be overflowing with scraps of foam core and hot glue, basswood and vellum — and it was wonderful. He would sit down each class and teach us a new representational skill, from hand drafting axonometric and perspective drawings to digital modeling. He wanted each student to take the basics from his instruction and then branch out to find their own unique methods of communicating their design ideas.” 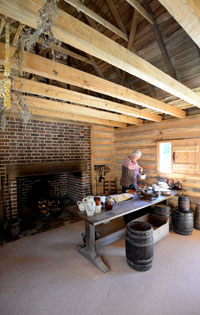 Field trips to see and discuss local architecture and architectural history, including some of his firm’s past and current projects, are a big part of learning, he added. Students particularly enjoy and get lot out of visiting projects under construction to see, hear and smell the worksite, according to Pease. Sometimes he will assign students to design a fictional project similar to one his firm has tackled.

“He instilled in us the idea that good, thoughtful design is not beholden to a particular style or time period, but that it captures the spirit of the particular setting and people at hand with deep understanding and design rigor,” Sendor said. “Overall, his architectural design courses were the ultimate embodiment of what a liberal arts education should be — a harmonious fusion of art, science, history and culture.”

Serena Hooker ’19 took several of Pease’s classes, and was one of several students who referred to Pease’s laid-back and encouraging teaching style.

“His studios and classes were some of the best learning experiences I had in design, theory and craftsmanship,” Hooker said. “One of my favorite things about Pease as a professor is that despite his seemingly endless knowledge about Williamsburg architecture, he maintains a fun and earnest openness in the studio, fully embracing that the studio is a space for collaborating and sharing wild ideas.”