Inside Blow Hall, a holiday tradition going on 25 years took place the morning of Dec. 8.

The Salvation Army provided the stockings; Sandy Wilms, executive assistant to the William & Mary Board of Visitors, and faculty and staff from departments all over the university provided the stuffers.

"The response from every corner of the campus to our call for donations was terrific," said Wilms, who was aided in her work by Ruth Hines, retired from the Provost's Office, and Joanne Wilkerson in Finance and Administration. Other committee members are Carla Costello in Compliance and Equity and Lydia Whitaker in Applied Science. "This was one of our best years. All 50 stockings were filled to overflowing!"

The effort was one of many across William & Mary this holiday season to support people in need.

Years ago, Wilms saw a notice in a local paper about the Salvation Army conducting a stocking drive. 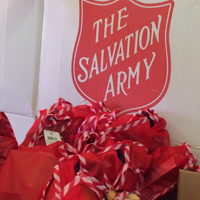 “Everybody does children, but they were doing senior citizens also,” she said. “When I saw that thing in the paper, I thought what a nice thing to do. You have the Angel Tree and that other stuff, but when you get up there in age, you don’t necessarily want anyone to do anything. But a little Christmas? It’s not embarrassing. It’s not charity.”

Wilms’ devotion to the project has its roots in her childhood in Cleveland, Ohio. Her father was an electrical worker who held the Salvation Army in high regard.

“The family always supported the Salvation Army,” Wilms said. “When we had things to give away, we wanted to give them to somebody who could use them.”

Other holiday-oriented projects involving the university community weren’t quite so age-specific.

During the university’s “Help Stop Hunger” drive in November, W&M Dining Services contractor Sodexo teamed with students throughout campus. The project resulted in the collection of 162 pounds of food and a check for $2,585.31 being turned over to Proclaiming Grace Outreach.

“That’s the approximate equivalent of $7,500 in buying power,” said Jim Crouse, president of the faith-based, non-profit corporation that provides food and clothing and other services to the disadvantaged in lower New Kent and James City County.

Crouse and Melanie King, the executive director of Proclaiming Grace, were on campus on Dec. 5 to collect the food and money from Melissa Strain, marketing manager for W&M Dining Services. 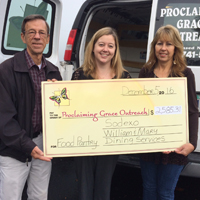 “Dining services is honored to have been able to help coordinate the Stop Hunger Food Drive for our community,” Strain said. “The generosity of the students of William & Mary has been tremendous. We strive to provide our students with resources to continue to give back to the local community and place their mark on the world.”

And at the James City County Recreation Center, also on Dec. 5, at least a dozen W&M student-athletes were busy helping with the fourth annual holiday gift drive for the homeless children of Williamsburg and James City County. Soccer players Haley Kavanaugh and Corinne Giroux, both seniors, were seated at a table outside an auditorium helping volunteers check in.

“A lot of people at the College are fortunate enough to have a good Christmas with our families and get gifts for our families,” Kavanaugh said. “This is a great way to let other people have the same experience and to make their Christmas extra special.”

Inside the room, encircled by rectangular tables holding books, crayons and all nature of toys, gifts children could pick to give to parents, shopping bags teeming with food and other holiday goodies, tennis players Tristan Bautil ’19 and Aiden Talcott ’17 and football player Simeon Brown ’19 hung strings of Christmas lights. 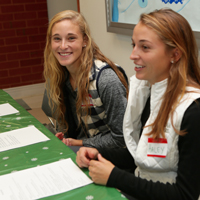 Some of the toys were collected by Associate Professor of Kinesiology and Health Sciences Ray McCoy, while some of the school supplies were gathered by Faith Smith in financial reporting.

“You see the joy on their faces; they are so thankful,” said McCoy, who has been involved the past two years. “The joy and hope they have that this is happening is so obvious. I did this last year, and just had a great time.”

Smith said she’s always enjoyed helping others, a lesson she learned from two people who served as mentors.

“A friend of mine said, ‘You should always do something for children because children really can’t do anything unless an adult helps them.’ That always stuck with me,” she explained. “And I had a father-in-law who passed last year. He always said, ‘Have universal love for everyone.’

“I have the highest respect for those two people, although they’ve both passed now. I wanted to take their legacy on as much as I can.”