Deep in the College Woods -- Martha Case believes in love at first sight, especially when it comes to Lady’s Slippers.

Lady’s Slippers are among the most fragile, confounding orchids known to man. Case, an associate professor of biology at the College of William & Mary, saw her first Lady’s Slipper as a child in Michigan and then began studying them as a graduate student at Michigan State more than two decades ago. She remains smitten to this day.

“I can’t stop working on them,” she admits happily.

On a blustery spring day, she and Stephanie Wilson ’12, who has undertaken a project involving the pollination of Lady’s Slippers, escort two acquaintances into the College Woods. Case cautions all not to say, do or write anything that would give away their location. Uninformed people who come across these rare flowers often think they are being helpful by digging them up and transplanting them -- saving them.

The foursome shimmies down a leafy embankment and there they are, vibrant but delicate, elegant, enchanting, scarce. Once Case begins telling the orchid’s story, the reason for her career-long fascination becomes clear.

Once pollinated, one Lady’s Slipper produces about 250,000 seeds. You’d think there would be juvenile plants all over the place. Yet considerably less than one percent of those seeds germinate and grow. The Lady’s Slipper is that finicky about where it sets up house.

Once developed, the Lady’s Slipper features a bulbous lip and gives off a sweet, musky fragrance that draws insects of all kinds. But only particular species of bees act as pollinators.

That’s because the bee has to be the right size and shape to pollinate the orchid during escape from the Lady's Slipper’s treacherous, treasonous trap. The fragrance indicates the bee that crawls inside will receive a sweet treat. Instead, there’s nothing there and they become trapped inside the flower.

The only way out is a narrow passageway along the back, which leads to the tiniest of holes by the anther. If the bee has been at another plant and has picked up some pollen, the Lady’s Slipper will scrape the pollen off the bee’s back on its way out and become pollinated.

There’s more. Tiny crab spiders, the same yellow as the flower, live inside the Lady’s Slipper. A pollinator comes in. They attack.

The down side to this all-risk, no-reward situation is that dead insects inside the Lady’s Slipper kill the function of the flower. After all, there’s only so much room.

Case says that’s okay. The law of natural selection is at work. 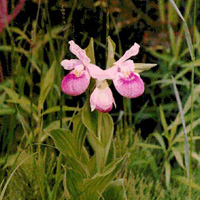 “If a plant killed too many (insects) it would not be able to spread the genes responsible for its flower’s shape so we would say that the shape would be selected against,” she explained. “When that plant died those genes would be lost in the population while the more effective plants that do allow their pollinators to escape (allowing genes to be passed on) would be selected for.”

In general, orchids are ideal for testing ideas about natural selection “because when you look at a leaf or bark or other features (of other species) it’s often not known what the selective agent is. In other words, what is selecting for the feature you’re looking at? An orchid is absolutely tailored to its pollinator, so the selective agent is the insect.”

All that intrigue and suspense for a flower with a bloom that lasts . . . about two weeks.

Lady’s Slippers are abundant in cold-weather Michigan, where even two different varieties can grow side by side, each with a specific pollinator. They become more rare as you move south; in Virginia, the areas conducive to their survival are patchy.

Outside of China, researchers focused on Lady’s Slippers are rare. Wilson, Case’s student, believes she has discovered the home of the bee that is the specific pollinator of the Lady’s Slippers in the College Woods. It is the right size and shape to do what the orchid needs, though not the species Case and Wilson expected. Case has her fingers crossed; having a readily available supply of pollinators would unlock a new range of experiments.

“These are the most unlikely plants to live in so many ways,” Case says of her beloved orchid. “One of the reasons I got into botany was that they made such an impression on me.”