Susan Verdi Webster, the Jane Williams Mahoney Professor of Art History and American Studies at the College of William & 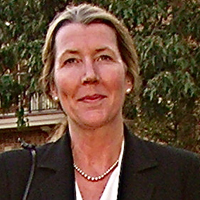 Webster’s accolade is one of just two awards given this year in the area of fine arts research.  In total, 180 fellowships were awarded to a diverse group of scholars, artists and scientist selected from almost 3,000 applicants from the U.S. and Canada.

Guggenheim awards are a family tradition for the Webster’s. Susan’s father, the late Grady L. Webster, received a 1964 Guggenheim Fellowship in Plant Sciences while teaching at Purdue University.  According to the Guggenheim Foundation, only two other father-daughter tandems have won this prestigious award.

“This is splendid news for Susan Verdi Webster and William & Mary,” said President Taylor Reveley. “Guggenheim fellowships go to the most promising scholars, artists and scientists in the world. The fact that Susan and her late father both received Guggenheims – one of only two such father-daughter constellations of which we’re aware in the history of Guggenheims – is remarkable. We are very proud of Professor Webster."

Webster will continue her research and writing titled, “The conquest of European architecture: Andean masters and the construction of colonial Quito.” She is a leading scholar in the art of post-colonial Latin America, focusing primarily the indigenous artists, builders and artisans who created Quito, Ecuador.  A former Fulbright Fellow, Webster is regarded internationally as an expert in confraternities—pious groups of laypersons—and their art patronage in Spain and Latin America.   She is the author of “Arquitectura y empresa en el Quito colonial: José Jaime Ortiz, alarife mayor (2002),” and “Art and ritual in Golden-Age Spain: Sevillian confraternities and the processional sculpture of Holy Week” (1998).

Since its establishment in 1925, the Foundation has granted nearly $290 million in Fellowships to more than 17,000 individuals.  Time and again, the Foundation’s choice of Fellows has proved prescient: thousands of celebrated alumni and scores of Nobel, Pulitzer, and other prizewinners grace its rolls.