{{youtube:medium|wMO8627aE60, Meyers discusses the process of publishing online "The Poetry of Sidney A. Alexander."}}

It was the mention of the 1887 Newdigate Prize for poetry that first caught Terry Meyers’ attention in 2008 as he skimmed an English bookseller’s catalogue offering for sale a notebook of poems by someone whose name he barely recognized.

Oxford University’s prestigious prize for best composition in English verse by an undergraduate student has been around since 1805, and was captured by the likes of Matthew Arnold, John Ruskin, Oscar Wilde and the recent poet laureate Andrew Motion.

Sidney Alexander? Meyers admits to some “vague” knowledge that Alexander’s winning poem, on the life of Buddha, was known as one of the signs in Victorian England of an interest in the East. 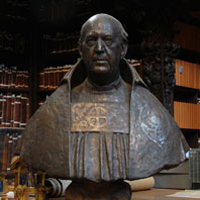 As far as the man himself, he was a mystery.

Meyers, Chancellor Professor of English at William & Mary, collects literary material from the Victorian Age – first editions, letters, manuscripts, mostly relating to the nefariously subversive Algernon Charles Swinburne.  But he decided to take the plunge. After all, the notebook of Alexander’s mostly unpublished works was modestly priced at about $110.

“As I read through it, I realized that Sidney Alexander (1866-1948) may not be the greatest poet in the Victorian Age -- he may be one of the deservedly obscure poets in English literary history -- but I also was intrigued,” Meyers said. “Despite evidence in the notebook that he was beginning to shape a literary career – something he’d been fascinated by since his days at (the heralded) St. Paul’s School (in London)-- in the end he became an ecclesiastic, one of the canons of St. Paul’s Cathedral.”

All of which might make for some conversation at a cocktail party, Meyers thought, but wasn’t likely to be interesting to the general public, or to publishers.

Then Meyers gave a plenary talk at a conference in London on Swinburne, and met some people from the University of London who sponsored a website that hosted scholarly works. They were familiar with Meyers because of his work on Swinburne, and, when he approached them about Alexander, became intrigued with his work with Swem Library in presenting the transcription and digital images of the ledger of Richard Manning Bucktrout, a 19th century Williamsburg undertaker and businessman.

They were interested in Alexander, Meyers believes, because the project was a rare opportunity to bring to light an unpublished manuscript and to be able to publish electronic scans of the manuscript pages and annotated transcriptions of a young poet’s work as it evolved from his schoolboy days through his time at Oxford and a bit beyond. 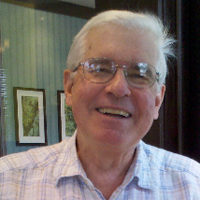 In January, “The Poetry of Sidney A. Alexander” was posted online by the University of London’s Institute of English Studies. It’s 469 pages long (including a biographical and critical introduction) and free to the public.  And it chronicles the development, Meyers says, “of a Victorian poet who abandoned his nascent literary ambitions” despite having published poems in some leading publications of the day.

Meyers is quick to praise Michael O’Brien ’10, Shelly Holder ’11 and Jane Ryngaert ’13, students who, funded by an endowment from John Rochelle Lee Johnson, Jr., handled what the professor calls important “scut” work, everything from transcribing to scanning pages.

That would be interesting enough, at least for specialists in Victorian religious poetry, if the story ended there. But Alexander’s life is of more than passing interest.

After apparently relinquishing his dream to become a poet in the mold of religious poet John Donne – Alexander makes mention of a second notebook, though there are no clues as to its whereabouts – he was ordained a priest.  He was ambitious, aiming finally to become, like Donne, Dean of St. Paul’s.

That never happened and an embittered Alexander remained a canon of St. Paul’s Cathedral, responsible for fund-raising and for protecting the property from damage from commercial development in the City and from German bombs during the Blitz of World War II.

“He was instrumental in working with fire brigades and volunteers to put out the fires and protect the fabric of the building,” Meyers said. “If there had not been that kind of organized protection of the structure, there’s every likelihood it would have been much more seriously damaged.”

And earlier, as London was expanding its subway lines, Alexander worked tirelessly at raising money to fortify cathedral foundations that were both shallow and literally built on sand.

“It’s not the kind of responsibility you associate with a cleric,” Meyers said, “but obviously someone has to watch out for such things.”

Meyers said that although some of Alexander’s poems do have a larger interest, the greatest contribution Alexander’s notebook makes is as “an interesting cultural artifact.”

“He was a precocious and well-educated young poet in the 1880s, and that’s just the time in English history when the movement of art for art’s sake was developing,” Meyers explained. “You can see an evolution where he moves away from only religious poetry and only didactic poetry to poetry that’s a little more concerned with capturing a mood or impression or drawing some picture that doesn’t necessarily have some immediate moral or religious quality to it. It’s an interesting cultural marker for those 10 years in English poetry.”