“We got a turtle!” Cassie Cook hollers across the dunes of Fisherman Island National Wildlife Refuge.

In a split second, Cook’s got ahold of the large female diamondback terrapin, who froze in the sand when she saw Cook and has since retracted into her shell. She won’t come back out until she’s been set back on the ground and left alone for a few minutes.

“I kind of want them to fight back more, to be a little more feisty,” says Allison McCluskey ’16, a geology and environmental science major.

Nearby, Cook spies a scattering of diamondback terrapin eggs, as fragile as tissue paper. Some of the eggs are mostly whole, with just a hole poked in them. Others are shredded, their edges dried and curled in the relentless sun.

This is how Cook and McCluskey spend their mornings this summer. Starting just after dawn, every day since Memorial Day and continuing through July, they drive from the Eastern Shore of Virginia National Wildlife Refuge out to Fisherman Island on the southernmost tip of the Eastern Shore and look for ruined terrapin nests.

The research is part of Cook’s master’s project in biology, with McCluskey, another W&M student, hired to help. The multi-pronged project examines nest predation, looking at, among other things, how plants predate nests.

You read that right. Cook is specifically studying how the invasive species, Phragmites australis, or the common reed – often just referred to as phragmites, pronounced frag-mite-ees – affects diamondback terrapin nests and predation by other species.

She believes the terrapin she has in her hand is unrelated to the torn-up nest. It’s another female who has come ashore, one of more than 100 that Cook and helper McCluskey have found this year. The nest was likely predated the night before, and it looks like crows started the damage (they poke holes in the eggs), before raccoons finished the job (by smashing through like a wrecking ball).

“Predators like crows and raccoons are relentlessly efficient at finding and destroying nests,” said Randy Chambers, biology professor and Cook’s advisor.  “Cassie’s work will determine whether the expansion of phragmites is yet one more negative impact that compromises terrapin nesting success.”

Cook chose William & Mary for graduate school precisely because of its diamondback terrapin research, and in particular because of Chambers’ decade-plus of work with the turtles.

The diamondback terrapin, once plentiful in the Chesapeake Bay’s inlets and tributaries, is now “near threatened” in Virginia, while it enjoys varying degrees of protection in other states throughout its East Coast range. It is the only turtle in the country that lives exclusively in brackish saltwater marshes, coastal bays and lagoons, according to William & Mary’s Virginia Institute of Marine Science.

Chambers and other researchers have done extensive work cataloguing and preventing mortality to adult terrapins from boat strikes and the crab fishery, promoting by-catch reduction devices that prevent the turtles from being caught in crab pots and drowning.

But “it’s also really important to look at the other end of their life cycle and really make sure we’re having good recruitment and successful nests, so we can repopulate these areas where terrapins may be declining,” Cook said.

That thinking brought her to phragmites, the invasive marsh grass that is taking over much of the diamondback terrapin’s nesting ground. Cook is interested in seeing how nests fare when they are adjacent to the tall grass. With large, aggressive roots that can grow more than a meter in a single season, phragmites easily invade underground nest chambers, destroying eggs or becoming so tangled and matted that fresh hatchlings can’t escape.

Because undisturbed, buried terrapin nests are almost impossible to spot, Cook has to go the long way around to find out more. Near phragmites, she has buried nylon mesh bags with hollow cores at the depth of terrapin nests. After the 65-day incubation period, she will dig them up.

“I’ll bring them back to the lab and look at the amount of root growth and relate that to the density of the phragmites on the surface,” she explains. 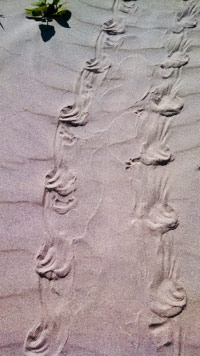 In different parts of Fisherman Island, she’s buried wooden paint stirrers equipped with temperature sensors that take hourly measurements at the depth of terrapin nests. Some of them are buried along with her nylon root bags, while others are in areas with lesser vegetation.

“In some of these phragmites-dominated nesting areas, there is a big chance we could see cooler incubation temperatures, and more males produced,” Cook said. “If we’re producing only male clutches, we may reach a point where you just don’t have a reproducing population.”

Cook said crows will often watch nesting diamondback terrapins come ashore, wait until the nests are laid and then dig them up.

But while crows are destructive, raccoons are the greater threat. Other researchers have found that raccoons can wipe out up to 90 percent of all diamondback terrapin nests, Cook said.

And this year is unusually raccoon-heavy at Fisherman. The U.S. Fish & Wildlife Service, which manages the refuge, annually contracts with the U.S. Department of Agriculture to trap raccoons on the island, which is also breeding ground for sensitive migratory birds and so is closed to the public.

Yet refuge managers believe raccoons this year either evaded capture in the spring or came from the mainland Eastern Shore. Cook said a second round of trapping is in the works.

Cook and McCluskey search the dunes together, but once they find a nest, they split in a division of duties.

Cook counts the eggs and inspects them and the surrounding area for clues as to what predated them, while McCluskey marks the location by GPS and sets up a square-meter perimeter. They tread softly in case eggs remain viable underground.

They use the square meter to estimate the amount of vegetation surrounding the nest. Cook hopes to be able to suss out whether vegetation gives terrapins cover as they nest and protects nests, or conversely, if vegetation attracts predators as they skirt along the edges, looking for food.

With two weeks left in the study, they have found more than 230 predated nests.

“On one hand, it’s data for me, but on the other hand, yeah, it kind of stinks,” Cook said. “The raccoons are doing some work out here, and it’s sad. But luckily, we seem to have a good number of terrapins out here and they lay a lot of eggs. So we’re always hopeful that maybe there are a couple of eggs in there that predators didn’t get, and then too that they have multiple nesting events. We hope this area will be so flooded with nests that somebody will survive.”

Hope for the future

Although McCluskey is not a biology major, the summer research is nurturing her interest in paleontology, which she describes as the marriage of biology with geology.

“I’m so grateful that I have these opportunities through William & Mary, because it’s just not the norm elsewhere,” she said. “The faculty really rely on the help of undergraduates. One of my favorite things about being here is that for a geology degree, you have to do research. Your capstone is your senior research. You conduct professional, quality data collection and analysis and can try to get published. I just think that’s really amazing.”

In the end, Cook hopes that her research helps inform land managers on how to create or preserve prime diamondback terrapin nesting habitat.

Her project was funded jointly by grants from the Virginia Herpetological Society, the Diamondback Terrapin Working Group and William & Mary’s Office of Graduate Studies and Research.

“We’re excited to have this opportunity to be out here,” Cook said. “It’s a good experience for both of us. I really hope that we can collect good information that points us to some trends and hopefully aids local land managers in findings ways to manage exotic invasive species, or just the land in general, to really support the terrapins.”