Soon after Commencement, the photos began appearing on Drew Stelljes’ Facebook wall: students in front of the Capitol Building in Washington D.C., students in hair nets and aprons at D.C. Central Kitchen, students meeting around conference tables talking animatedly to some of the country’s leading experts in community engagement.

The photos were all taken during this year’s D.C. Summer Community Engagement Institute, one of three summer institutes offered by the College of William & Mary and run by the W&M Washington Office. The other two institutes are focusing on national security with Government Visiting Professor Liz Grimm Arsenault ’02, and new media with Modern Languages Professor Ann Marie Stock.

This year’s D.C. Summer Institute program, which began May 14, has given 43 student fellows two weeks of site visits and sessions with subject matter experts, followed by full-time internships in the nation’s capital.

"We knew we could run a successful Summer Institute program," said Adam Anthony, director of the William & Mary Washington Office, "because we have run the successful W&M in Washington semester program since 2006. Our assistant director, Roxane Adler Hickey, directs both programs and applies many of the practices and procedures we developed for the semester to the summer.” 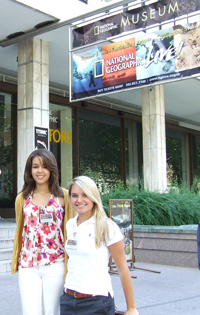 Anthony said that the value of the program lies in three areas: “the expertise of our professors teaching the subjects they love, the time our students spend with experts in the field and inside D.C.'s premier institutions, and, finally, the help they get from a W&M administrator in finding and managing their internship."

"Our professors and administrators help our students see and work at the best that D.C. offers -- the State Department, the CIA, Discovery Channel, National Geographic, the Peace Corps, the White House -- they're all within reach."

Erin Spencer ’14, an ecology major, is participating in the New Media Institute this summer. Through the program, she landed an internship with National Geographic, where she is working in the Travel Digital Media Department.

“So far, I've had a hand in content editing, social media and online promotion, and even have my own posts on the National Geographic Intelligent Traveler blog,” she said.

Spencer hopes to one day combine her science and media backgrounds to raise awareness about marine conservation, she said.

“National Geographic is the perfect place for me to get hands on experience I wouldn't be able to find on campus,” said Spencer.

The classroom portion of the Community Engagement Institute aimed “to help students think critically about what makes for successful leaders in the public sector,” said Stelljes, director of community engagement at William & Mary.

“Though emphasis is placed on leadership and followership in the non-profit sector, lessons and examples are drawn from history, communication studies, education, philosophy, sociology, politics and the field of social entrepreneurship,” he said.

To complement what the students learned in class during the first two weeks of the institute, they met with multiple guest speakers. The list of those speakers reads like a veritable who’s who of leaders in the community engagement world. Some of them include Jonathan Greenblatt, director of the White House Office for Social Innovation and Civic Participation; Doug Bunch B.A. '02, J.D. '06, associate with Cohen Milstein and one of the founders of Global Playground; former Gov. Timothy M. Kaine; Mike Curtin, CEO of D.C. Central Kitchen; John Bridgeland, CEO and president of Civic Enterprises; and Aaron Williams, director of the Peace Corps. 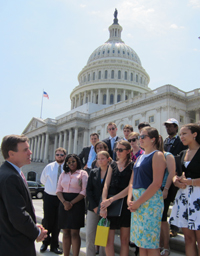 The students also met with U.S. Senator Mark Warner (D-Va.), who posted his own photo of them on Facebook, saying in the caption, “Great to meet with students from The College of William and Mary's Summer Community Engagement Institute. They'll do important work at D.C. non-profits this summer.”

Adriana Green, an English major with a minor in literary and cultural studies, graduated on May 13 and began attending the institute the next day.

“Graduation for me meant opportunities and exploration,” she said. “I just needed to find a place to do those things. I’m not certain where I want my career or post-graduate learning to take me, so I’d planned on trying different internships and career paths to see what interests me in the moment. DCSI provided the perfect opportunity.”

Mimi Laycock, a rising junior with an interest in sociology and kinesiology, said that one of the most enjoyable aspects of the class for her was “the people I have met and the advice I have been given.”

“From Jonathan Greenblatt to Mark Curtain, the leaders we have interacted with have all been open to discussion and willing to speak with us about their journeys to become public figures in leadership,” she said. “Additionally, the class has been able to gather enormous amounts of advice and knowledge, especially from alums. Drew has done a wonderful job coordinating discussions, lunches, and dinners with alums who are willing to give us advice on anything from grad politics to sleeping on couches.”

Laycock said that she thinks the institute will teach her not only about herself but about potential job opportunities, as well.

“I hope to leave D.C. with idea on how to combine my passion for serving others with a career,” she said. “I can already tell that this institute will help me be more professional, confidant, and community -service minded.”

Green, too, hopes that the experience will result in a job for her.

“This experience is actively creating career opportunities for me every day, especially as a recent graduate,” she said. “I’m staying in the D.C. area and will be looking for employment in the next six months. Being able to talk one-on-one with the movers and shakers of the city will definitely help me find opportunities for personal exploration and growth.”

“This program is without a doubt the reason I’ve begun, and will continue, to find and thrive in post-graduation opportunities.”