A theatre professor, a recent graduate and an alumna – unbeknownst to one another – all ended up in Juneau, Alaska, this August, working on the same play.

“It spread into more of a William & Mary event than I ever imagined,” said Matthew Allar, Class of 1955 Associate Professor of Theatre. “The assembly of all of us way up there meant that there was a huge William & Mary theatre presence in Alaska working on the show – in a fairly remote place.” 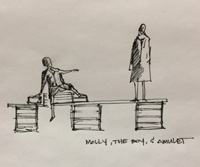 When Allar signed on with Alaska-based Perseverance Theatre as scenic director for its production of “Peter and the Starcatcher,” he didn’t know that the show’s sound designer, Amy Altadonna, graduated from William & Mary in 2001. Neither did he know that Joseph Biagini ’16, had landed a year-long artistic internship with Perseverance.

Long before the summer, Allar and Altadonna began working together as part of a team scattered across the country, collaborating remotely.

“In the early stages, when we were communicating via email and phone, it was just so strange to have these three other visual designers, who were just these disembodied voices,” Altadonna said. “So I Googled them. And the minute I saw that Matt worked at William & Mary, I was like, I got to meet this guy.”

'The Tribe mentality is real'

Altadonna majored in music at William & Mary. But after not landing a seat the pit in Sinfonicron, she was offered an opportunity to do its lighting, introducing her to backstage aspects of performance.

“At William & Mary, there’s such a vibrant, student-motivated campus life,” she said. “And the Tribe mentality, it’s real. I got taken into the fold and taught a bunch of skills and was allowed to grow into the role. And by the next year, I was the master electrician of Sinfonicron.”

She got her start as a sound designer the year after she graduated. She was still in town, working at the bookstore, “feeling like a loser,” when a theatre student asked her to help with his senior thesis directing project. He had attended her senior recital the previous year, so knew she had necessary experience with computer music.

“To this day, sometimes I still think it’s the best show I’ve done,” she said. “There were no rules. I was totally making it up as I went along. And now, 15 years later, I’m a professional frickin’ sound designer. It’s just so unbelievably fortuitous.”

Over the years she has also done a number of productions with Perseverance Theatre. It was the second for Allar. After working remotely for a number of months, they finally met in Juneau in the run-up to the show.

Allar heard Altadonna’s name over the years in the department and knew she had returned to William & Mary to speak to sound design classes. “So it was really a rare joy to have this working relationship with her, albeit it took going all the way to Juneau,” he said.

Biagini was already in Juneau, working on his full-time artistic internship after graduating William & Mary in May as a theatre and economics major. He had no idea that Allar, with whom he had just finished studying, was working on the same production.

“I showed up and looked at the calendar in the office and it said M. Allar arrives this day. So it was quite a surprise,” he said. “I knew he had connections with the artistic director for the theatre, but I was not aware he’d be here.” 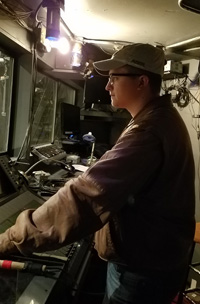 Allar said it wasn’t incidental that Biagini landed the internship. At William & Mary, Biagini differentiated himself from other students by being equally as strong on stage as backstage. He acted, was a carpenter in the scene shop for two years and directed his own senior show (Edward Albee’s “Seascape”).

“While he was a student here, one of the great things about Joseph was that he was kind of the model of a William & Mary Theatre student, in so much that he really got involved with a lot of different kinds of things,” Allar said. “It’s nice to see the efforts of a student to embrace the idea of theatrical artistry in a very broad context – which is what we hope to impart to our students – to then turn around and be rewarded for that broad liberal arts educational foundation with a great internship.”

Biagini was assigned to work for Altadonna as an audio engineer, mixing the actors’ microphones. It was work he’d not done before.

“They did a really great job training,” he said. “That’s part of my whole thing; I like to try out different areas of theatre, just to have a working knowledge. So I’m really grateful for the opportunity.”

Altadonna said Biagini is too modest; he excelled beyond measure.

“If I didn’t have Joseph there, I would still be up there, trying to fix the show and crying about it,” she said. “He has this internal self-leadership, self-awareness. William & Mary students are just the best at saying, ‘OK, I’m going to put my nose to the grindstone and I’m going to figure this out’ … That freed me up to be collaborating with the director, Matt and the other people on the show, to be thinking instead about how things sounded. He was such a partner to me, instead of my having to stress out and manage every little creative interaction.”

Allar said he and Altadonna spent some time talking about what they perceived to be the particular strengths of W&M students working in the arts.

“The ability to discuss and respond to various types of artistry, whether it’s auditory or visual or text-based, is kind of a complex thing,” he said. “It’s hard to pin down a specific strategy or pathway to do that. That ability is showcased in William & Mary students in that they’re very good at picking up contextual information on the fly in new situations. Since Amy and Joseph share this background, they both have the common vocabulary of how to arrive at a new project or situation and tackle it head-on, knowing that there are new things to deal with but that they are capable of quickly picking things up in the context and finding ways to relate them to each other. This is really a hallmark of what we hope W&M students bring to the table in the working world.”

There’s one more William & Mary connection to this story, Allar said. The local newspaper, the Juneau Empire, sent a photographer for its Capital City Weekly arts insert.  You guessed it –Mary Catharine Martin graduated in 2004.

“It was a rare assembly of faculty, recent and not-so-recent alums working together on a professional production in such a unique way,” Allar said.