Though she just graduated William & Mary a few short weeks ago, Brittany Liu ’16 has landed what she calls the “role of a lifetime.”

When the Virginia Shakespeare Festival opens at Phi Beta Kappa Hall on June 29 with “Romeo and Juliet,” Liu will star as Juliet.

The role is the crowning glory for Liu, a marketing and film major who has spent the last two summers playing smaller roles for the Virginia Shakespeare Festival. She started just after her sophomore year as the 15-year-old Lucius in “Julius Caesar.”

She followed that up with roles in “Antony and Cleopatra,” “Illyria” and “All’s Well That Ends Well.”

Meanwhile, during the school year she was performing in W&M theatre productions. “I was sort of like a fake theatre major here,” she joked. “I’ve gotten to do a wide variety of things with the festival, and now take on this big role, which is very exciting.”

She laid the groundwork for the role of Juliet with a longstanding fascination for the character, one that had her writing papers about Juliet for a feminist theory class. 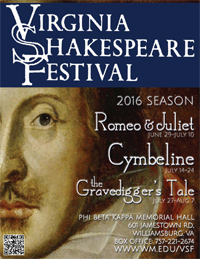 “I think having that academic background knowledge, it made me want to play her even more,” Liu said. “It just layers in more to the character as I play it on stage. She’s audacious. She’s passionate. She’s quick-witted. She’s perceptive, and she has this emotional maturity that is way beyond her years ... She defies society’s gender roles; she defies the patriarchy. She’s an incredible character, which is kind of a rarity in a female role in Shakespeare. I feel incredibly lucky to take on such a big role in a space that I’ve called home for four years.”

Owens said he had more than 100 audition requests in New York, Houston, Williamsburg and Washington, D.C., for the role of Juliet, and found slots for about 40 of them. He called back the 10 best in New York, where Liu traveled to read opposite the rest of the Capulets.

“She was the clear choice,” he said. “It did help that I’d worked with her in supporting roles in previous seasons and taught her in my semester-long Acting Shakespeare class, but she earned this role.”

Liu said she made W&M home partially because of the university’s partnership with the Virginia Shakespeare Festival.

“I knew I wasn’t going to major in theatre,” she said, “but I saw there was this festival and thought maybe one day I could get into that. In the summer I do that and during the year I get classes in film and business – that’s going to help me market myself in whatever I do – and classes in feminist theory and art and economics ... It all helped, having a broad education.”

Celebrating its 38th season, the festival will also present “Cymbeline,” plus a new production in cooperation with Washington D.C.’s Folger Shakespeare Library, “The Gravedigger’s Tale.”

The special season coincides with the 400th anniversary of Shakespeare’s death, bringing to Williamsburg off-Broadway, film, television and veteran Shakespeare actors, such as Robert Ierardi, Tamara Johnson and Joey Ibanez, according to a press release.

Another W&M alumna, Megan Behm ’11, is making her VSF directing debut with “Cymbeline.” Behm has directed several Shakespeare productions in the Washington, D.C. area and has served as assistant director with the American Shakespeare Center and the Folger Theatre.

The 2016 festival runs from June 29 through Aug. 7, with performances at 7:30 p.m. Wednesdays through Saturdays and 2 p.m. on Sundays in Phi Beta Kappa Hall at William & Mary. Tickets can be purchased in person at PBK, 601 Jamestown Road, over the phone by calling (757) 221-2674 or by visiting www.wm.edu/offices/boxoffice.