Just moments before, the students in Nicole George’s graphic memoir class had been all a-chatter, but now the only sound is the hum of the air conditioner unit in a corner and the periodic clink of a pencil one of them drops on the table every time he decides to erase something he’s drawn on the small square of index card.

Each of the 11 W&M students is engrossed in crafting a simply drawn character that they’ll expand on over the next half-hour in the class that teaches – by alternate names – graphic novels, graphic narrative, graphic memoir or autobiography. Georges just calls them “comics.”

Georges, who is the 2016 Scott and Vivian Donaldson Writer-in-Residence at William & Mary this semester, is best-known for Calling Dr. Laura: A Graphic Memoir, and for her zine, Invincible Summer. Less known is the extensive service work she’s provided over 16 years teaching comics to children, seniors and everyone else in-between.

“I found out the students liked comics and were interested in comics, but did not have a class where they were learning the actual practice of making comics, only the theory,” she said. “So I was excited to come and teach a class that incorporated practice into William & Mary’s curriculum.”

She is connected to the campus by English Professor Chelsey Johnson, who teaches creative writing and was Georges’ neighbor years ago in Portland, Oregon. When Georges got stuck writing Calling Dr. Laura, she’d call Johnson.

“We’d look at what she had, and I’d give her suggestions or we’d talk about narrative structure, that kind of stuff,” Johnson recalled.

‘Bring someone to tears over a triangle’

Hayley Daniels ’16 didn’t think one way or the other about comics as serious art and writing until she heard Georges explain that it could take her seven years to write and draw a comic. “That was really surprising,” Daniels said.

She keeps wanting to recommend Georges’ master class in creative writing to her friends, but is thwarted by the fact that it’s only offered this semester.

The class was capped at 15 students and to get in, each had to submit a 10-page story and a self-portrait. The self-portrait wasn’t to judge whether students had artistic ability as much as it was to ensure they were comfortable with other people looking at their drawings. Many of the students have little experience in the visual arts.

“But that’s something Professor Georges has taught us,” Daniels said. “You don’t have to be this great artist to write a good comic. Sometimes simple shapes are a lot more moving than the best-drawn comics. She says that if you have a good story, you can bring someone to tears over a triangle.” 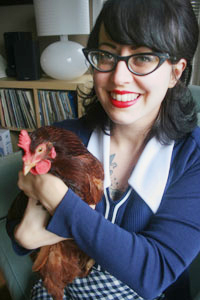 Drawing still gets a fair amount of treatment in the class, however. Over spring break, Georges tasked students to do as many drawings as they could of things that they thought they were no good at. One student drew people, another drew knees.

Sean Jacobs drew hands holding objects, like a banana or a bird. Jacobs is a CNU graduate who majored in creative writing and signed up for Georges’ class as a non-degree seeking W&M student to explore a new way of telling stories.

He said class assignments include drawing self-portraits and cataloging things the students heard, saw and did. After the first two weeks, he expected he had a lot of entries playing music. Instead he found more about food and people he didn’t realize were on his mind. He also realized that what he noticed over the course of a day depended a lot on his attitude.

Tasked with finding a story in the “mini-diary,” he narrowed it to ways he was disappointed with the Sundance Film Festival in Salt Lake City, Utah. For example, he was admiring the fog around the area’s mountains when a driver explained temperature inversion, the well-documented phenomenon exacerbated by fog that traps pollutants near the valley floor. “So then I went on and talked about some of the other ways I felt I’d been ripped-off on that trip.”

Students also spend time in class analyzing other comics, learning how the images can advance a story. Georges points out that characters always move to the right to denote movement; they rarely are drawn moving to the left. The students critique comic panels to identify what goes wrong in them, and they critique one another’s work.

Jacobs said he was grappling at the moment with crafting a silent comic, one without narrative. Because of his background in creative writing, he usually relies on words. Now he had to clearly demonstrate actions and motivations without being able to add explanation.

‘The world isn’t simple enough to explain in words’

Daniels had not read any graphic novels before signing up for the master class, but she might be in the minority in that. Works like Alison Bechdel’s Fun Home: A Family Tragicomic, Marjane Satrapi’s Persepolis: The Story of a Childhood and the classic Pulitzer Prize winning Maus: A Survivor’s Tale by Art Spiegelman are increasingly assigned reading in both high schools and universities.

Johnson said she thinks reading graphic novels helps students writing prose understand the level and intensity of imagery they need to create with words for their stories to have power.

“It makes you see and read differently, and think more about what kind of images you can create textually on the page, even if you aren’t using visual images in your own work,” she explained.

She said in some ways readers are ahead of the academy in understanding graphic novels as serious literature, though the academy is catching up. Still, some people retain outdated notions of what graphic literature can be.

“But that would be like if you only read the Hardy Boys or Nancy Drew and thought, ‘Well, why is there an English department? Literature is for kids!’”

As Georges simultaneously teaches and works on her next 300-page project, she is providing students a glimpse into the normally solitary endeavor of creating graphic novels. They see that the same considerations that go into writing a great story – structure, character, stakes, consequences and editing – come into play in graphic narrative. Plus they have the added burden of deciding how much to draw versus how much to write, and then actually executing it.