Terrence Mack ’15, a double major in German studies and international relations, has been awarded the Gates Scholarship for study abroad, generously donated by Chancellor Robert M. Gates '65 and his wife, Rebecca. Mack will study abroad this summer in Potsdam, Germany, with William & Mary’s faculty-led program there.

For Mack, a Hampton (Va.) High School graduate, choosing to major in German studies became an obvious choice when he realized he was seeking out YouTube videos in German and studying the language on his own. Mack also credits William & Mary professors Bruce Campbell and Robert Leventhal, both of the Modern Language and Literatures Department, for helping him develop his interest in German and international relations.

Studying abroad will also give him a boost when it comes to choosing his future career path, Mack said. His goal is to become a professional interpreter, and he also plans to pursue a master’s degree in education so he can teach high-school students German. Mack plans to continue working as a Teaching Assistant during his senior year, and he hopes to help other students, especially other people from traditionally underrepresented groups, have the confidence to pursue their passion.

"I want to congratulate Terrence Mack '15 on receiving a Gates Scholarship to study in Germany this summer,” Gates said.  “I admire his aspiration to become a high school foreign language teacher, especially because the United States lags so badly behind other developed countries in this area. I am proud to have someone of Terrence's commitment and character receive a Gates Scholarship." 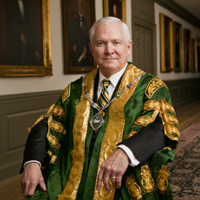 Finding the right balance between his studies and holding several jobs wasn’t always easy, though, Mack notes. He struggled at first to find his place at William & Mary when his initial plan to go in the business school didn’t work out. Mack’s college experience, however, is defined by perseverance: finding a new avenue to succeed when failure looms large.

“‘Where is your place at this school with all of these smart, intelligent students from all around the world?’” Mack remembered asking himself.

He found the answer in German studies.

“It took me a while but I’m glad I finally figured it out,” he said.

Mack has already developed a strong set of language skills during his career at W&M, and he serves as a Teaching Assistant in the German language program.

“I’ve started to feel more fluent in German, started to understand it more,” he said. “I can hold conversations in German, think in German.”

This summer Mack plans to spend the entirety of his study abroad experience doing just that: living, speaking and thinking in German. He is confident that being immersed in a German-speaking environment will perfect his fluency, and he is looking forward to all of the cultural insights he will gain on his first trip out of the United States. Mack acknowledged that for him, studying abroad wasn’t a possibility without the Gates Scholarship.

“So much weight has been lifted off my shoulders,” he said. “I want the scholarship to not only affect me but the rest of the community.”