The magnitude of Saturday’s Commencement continues to grow on Elsie Woodward '21.

After all, it is the day her granddaughter Anna graduates from the University of Virginia.

It’ll be the first of two shining moments that day for the Woodward family.

In the evening, Elsie, 75, will graduate from William & Mary with a degree in kinesiology. Anna plans to be there throughout, from the traditional walk across campus before Commencement to the moment Elsie’s name is called and she walks across the stage at Zable Stadium.

“When I realized we’d be graduating on the same day, I said, ‘Dadgumit, this is just the coolest thing,’” Elsie said.

Over the past few weeks, since details of both schools’ Commencements were finalized, Elsie has wondered just how many grandparents can say they graduated from college on the same day as a grandchild.

In the fall of 2018, Elsie decided it was time to take a major step in her life. So she enrolled at William & Mary the following spring to finish a degree she put on hold back in 1965.

She was ready to end her extended break from academics, what she calls her “54-year gap year.”

“I was at a point in my life where I thought, ‘You know, it’s about time I did something again,’” she said. 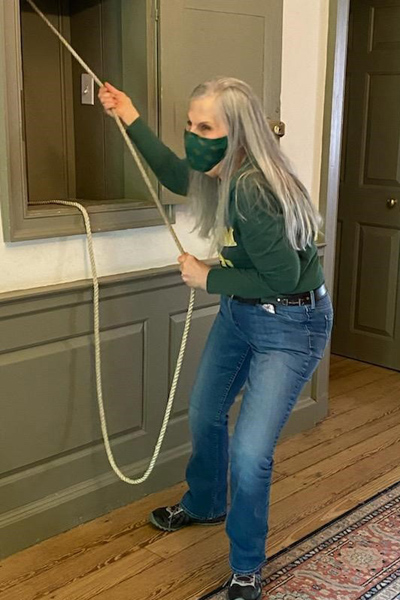 This semester, Elsie fulfilled the required hours to complete a degree she started in 1963 at the University of Miami.

She got married in 1965 and left school that same year to start a family. In the time since, she has raised two children and embarked on multiple careers while also raising horses, dogs and other animals on the 16-acre property she and her husband, Denton, share on the York River.

When she decided to go back to college, William & Mary was a natural destination for Elsie. She and her husband, a doctor who runs a radiology practice out of their home, live a short drive from the university’s campus.

But geography is only part of the story.

“It’s home to me,” said Denton Jr., who lives in Richmond. “I am so thrilled that my mom will be celebrating that it’s her alma mater very soon.”

Denton Jr. has two children, both of whom matriculated to the University of Virginia. Son, Ryan, graduated in 2019, and Anna will graduate only hours before Elsie.

“When I found out we would be graduating on the same day, my first thought was, ‘When’s our big graduation photoshoot?’ We’re going to be so cute in our caps,” Anna said.

“We’re so proud of grandma. I’m glad my graduation is in the morning and hers is in the evening. Otherwise, I’d unfortunately have to miss mine.”

Staying active physically and mentally hasn’t been a problem for Elsie, but she may have underestimated how much of a challenge becoming a full-time student again would be.

“The first course I took when I came back was human anatomy, and I said, ‘Oops, it’s not the same,’” Elsie said. “I passed, but I barely passed. When you try to learn something that you’re not used to, it’s tough.”

Elsie found concentrating to be difficult. At home, she takes care of her husband, who has chronic pain and stiffness from an inflammatory disorder. She also cares for the many animals on their property.

“You have your life that you’ve already established, and now you’re going to fit this thing in that requires so much more of your time,” Elsie said.

“There were a few times where I could hear her voice breaking over the phone, and she was on the verge of tears,” he said.

Elsie expressed frustration over her difficulties of retaining information, particularly in a Spanish class she took her first year back.

“It’s so frustrating for her that she had to relearn how to learn, if that makes sense, because her brain just doesn’t work the same way anymore,” Denton Jr. said. “It took her a while. She got some really bad grades for a while, and she actually worked with tutors who were very patient with her.

“Something clicked over those two-and-a-half years, and suddenly I stopped getting those calls from her.”

Elsie said she has had many professors who were willing to work closely with her to help her excel. Her human anatomy professor, Raymond McCoy, for example, was very understanding and helped her adjust to the challenges of being a student again.

It helped that Elsie was an engaged participant in lectures, offering her own unique perspectives when called upon.

“She is a pleasant student with a life of experiences that she enjoyed bringing to the anatomy lecture course,” McCoy said. “She was often seen talking to the students about health careers and real-life situations, so I saw Elsie as an advisor to the traditional students.”

Elsie’s return to school required many adjustments, including a re-introduction into the campus environment. At first, she felt out of place on campus and in the classroom.

“First thing, I’d walk into the class, and everybody thought I was the professor if they didn’t know me already. ‘Who’s this old lady?’ I’m older than any professor I’ve had. I’m older than all of them,” Elsie said.

Then there was the subject matter of some of her courses. She took a course called “Sex in America.” The professor called on her to speak about what dating was like during her high school years compared to what it’s like now.

“I bit my tongue on a lot of things,” she said.

It didn’t take long for Elsie to get acclimated to campus life, however. One day she saw some students wearing shirts adorned with logos for the Delta Delta Delta sorority and introduced herself. She was a Tri Delta when she was at Miami. The students invited her to visit their house, but she couldn’t get there before the pandemic.

Elsie participated in all lectures and course work virtually over the last few semesters. She made the most of her time on campus before the pandemic, however, making many friends along the way.

She became quite popular, actually.

Elsie and Denton Jr. have made athletic events regular bonding experiences. Before the pandemic, they were season ticket holders for football and basketball. Elsie’s popularity on campus came into focus for Denton Jr. when he saw football players waving to his mom from the sideline.

Some of those same football players greeted Elsie affectionately when they passed by at basketball games.

“It was so magical for her being amongst the 19-year olds and being treated like a rock star,” Denton Jr. said. “We’re sitting in Kaplan Arena, and there’s a line of 300-pound monsters coming up to her to say, ‘Hey Elsie, how ya doing?’ They all know her, and they all love her. It’s really cool.”

Elsie has grand plans for her post-graduate years. She wants to write about growing old gracefully. She wants to motivate senior citizens to exercise their minds as a way of preservation that is equally as important as physical exercise.

That was her goal even before enrolling at W&M, but her experiences as a college student helped her better recognize the challenges that some senior citizens face, particularly in educational settings.

“We work on our muscles and our nutrition and all this other stuff, but people are kind of leaving the brain sitting out there, and we’ve got to figure out why it works the way it does,” said Elsie, the only degree-seeking senior citizen at William & Mary.

Elsie is a rarity at W&M, but the presence of senior citizens at the university isn’t as unusual as one might think.

Elsie qualified for tuition assistance under the Senior Citizen’s Higher Education Act of 1974, which allows senior citizens who are Virginia residents to enroll in courses for academic credit as full-time or part-time students if they meet certain criteria.

“The Virginia Senior Citizens Higher Education Act is a wonderful opportunity, and William & Mary benefits from the perspective they bring into the classroom,” Marchello added. “It is important to understand that admission requirements and academic policies still apply, but those are likely not barriers to a motivated person with significant life experience.”

The college experience was different in many ways compared to when Elsie started her education during the JFK administration. But in other ways, her time on W&M’s campus brought her back to the ’60s when she was enjoying college life at Miami.

“I guess I figured I always would finish my degree at some point,” Elsie said. “It just wasn’t a priority because I was raising children and one thing or another.”

Elsie braved through some early difficulties and the pandemic to reach the doorstep of a college degree that’s been 58 years in the making.

“It was really hard going back, but, gosh, it’s worth it,” she said.