Using the language of movement, William & Mary’s dance department hosted its counterparts from Beijing Normal University this past weekend for an academic exchange.

“It crosses borders. So when you are meeting someone from a completely different background, it may seem like you have nothing in common when you in fact have a lot in common. And it opens doors for more successful communication, I believe.”

The BNU dance group visited W&M as one of several universities on its U.S. trip. BNU is a sister university to W&M, with the W&M Confucius Institute serving as collaborative partner between the two and sponsor of the visit. 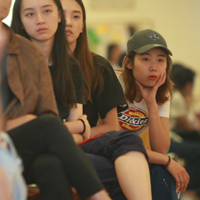 Events included Friday’s session, master classes with students and faculty from both universities on Saturday morning and BNU’s performance of “Confluence: A Performance of Traditional and Modern Chinese Dance” on Saturday evening.

“What I think is so fascinating to witness, is when our students and students from another country get together, and they did not speak the same language, but begin to dance and move together,” Glenn said.

“And they find this common language, this means of communication that they didn’t even know existed. So that broadens their perspective and opens doors. And so it gives them an opportunity to rethink values, beliefs and come up with their own paradigms.”

Two dancers performed Glenn’s piece “Fault Lines,” which she has been working on for the upcoming “DANCEVENT: Women in Power” performances that will run Oct. 25-28 at the Kimball Theatre, featuring choreography by W&M faculty.

“It’s about dysfunctional communication and how sometimes you agree to disagree and walk away,” Glenn said.

Through a translator, Glenn and Wade gave a rundown on the W&M dance program and their areas of research interest. They showed video clips of their choreography being performed and talked about the contexts of those pieces.

Wade’s “Indivisible,” which was performed at “DANCEVENT” last year, features choreography backed by spoken quotes by politicians before changing over to music to illustrate division versus harmony. 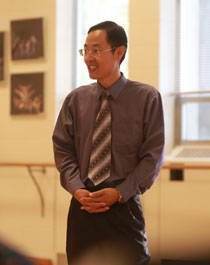 Glenn showed her duet “Perceived Threat” about a person dealing with post-traumatic stress disorder and then “Hush,” which was inspired by autism.

“My choreography themes center around the human condition, and more specifically I try to give a voice to those who might not have one,” she said.

BNU students asked questions, including one about the use of voice to go along with dance. Glenn answered that she likes to use poetry and spoken word as part of her research and has collaborated with faculty in English, the visual arts and music.

The dance connection with China includes W&M hosting a guest artist-in-residence from the country in 2013, Dance Professor Joan Gavaler visiting China in 2014 and Glenn and Wade going in 2015.

“That’s something we found when we went to Beijing together, was just how interesting it was to see how another culture approached dance,” Wade said. “And it makes you value your own, but also see other ways of viewing performance. And the discussion that we had there, the round table, I thought was so valuable and eye-opening for me because I didn’t realize how differently dance is perceived or treated in other cultures. I think it broadens our sensitivity and our awareness.”

“We’re not that different at a base level,” Wade said. “We’ve grown up and we’ve learned different things, and we have different politics and beliefs. But there’s just movement in the body so integral that that’s who you are at a really basic level.”