With a tug on a soft green cover, William & Mary officials Friday morning revealed Virginia historical marker W-109, commemorating the spot where the Bray School — an 18th-century school for enslaved and free black children — was once located.

Threatening skies couldn’t dampen the mood of a crowd of about 60 people who gathered at 107 North Boundary St. in Williamsburg for the unveiling, marking the culmination of many years of research and archaeological work on the school by W&M faculty and students.

{{youtube:medium|d7JuFto2kuw, Scenes from the ceremony}}

The slate-gray marker, situated outside of Brown Hall, reads, "The Associates of Dr. Bray, a London-based charity, founded a school for enslaved and free black children here in 1760. Located in Williamsburg at the suggestion of Benjamin Franklin, a member of the Associates, the school received support from the College of William & Mary. Anne Wager instructed as many as 400 boys and girls during her 14 years as teacher. In a culture hostile to educating African Americans, Wager taught the students principles of Christianity, deportment, reading and, possibly, writing. The curriculum reinforced proslavery ideology, but also spread literacy within the black community. The school moved from this site by 1765 and closed in 1774."

In attendance with W&M President Katherine A. Rowe were several members of the Board of Visitors; keynote speaker Terry L. Meyers, Emeritus Chancellor Professor of English; Jody L. Allen, director of the Lemon Project; Mark Kostro Ph.D. ’18, senior staff archaeologist for the Colonial Williamsburg Foundation; and other faculty, staff, students and local residents.

The marker unveiling was part of this year’s Lemon Project spring symposium, which began Thursday night with a film screening and continued through Saturday. 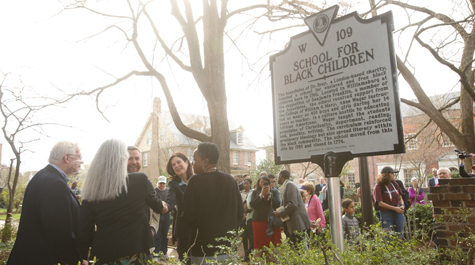 Established in 2009, the Lemon Project is a long-term research initiative at W&M that seeks to explore the university’s involvement in slavery and segregation and its continued relationship with the African-American community.

Allen, who oversees the Lemon Project, commenced the unveiling ceremony by saying, "Today we say to those (Bray School) children, 'You were here, you were important and we remember you.’"

Rowe thanked many of the people involved in the Bray School project — professors, archaeologists and students — and told the audience, "Your dedication to uncovering the history of the Bray School is what has brought us here today.

"On campus, the Lemon Project has proven that sustained reflection creates change," she continued. "In this moment, we see the fruits of that work. … This marker preserves and illuminates the history of the Bray School. The plaque invites all who pause at this site to join what the Lemon Project has done and sustains. It should give all of us an incredible sense of pride in the substantive and long study that brought this to fruition. And we are still in process."

Meyers, whose dogged research traced the location of the school and how it came to be, said, "I think it is possible that, with the obvious caveats and qualifications, William & Mary is the first institution of higher learning in what is today America to concern itself with black education."