A concept has been selected for the Memorial to African Americans Enslaved by William & Mary, President Katherine A. Rowe told the university’s Board of Visitors today.

The concept, created by William Sendor '11, is titled “Hearth” and resembles a brick fireplace, representing both a place of work for the enslaved as well as a place of gathering and community. 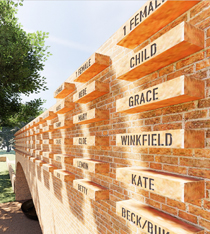 According to the proposal, the concept is meant to rekindle the memory of the enslaved, illuminate a place to reflect on the university’s past and radiate freedom and hope for the future. Although it may be altered during the design process, the concept for the memorial calls for the use of brick, a source of illumination and a place to highlight the names of enslaved people with room to add more as they are uncovered through research.

“The hearth is an ancient, powerful symbol of home, of community, and of belonging,” Rowe said. “The exploited labor of enslaved African Americans helped create William & Mary, and this memorial concept will unequivocally recognize their lasting contributions to this institution, with humility, gratitude and conscience.”

The concept was selected from more than 80 submissions the university received from individuals across 16 states and four continents through an international competition launched in August 2018. The contest was open to anyone interested in submitting to it. Rowe selected the winning concept after reviewing recommendations from a nine-member jury of professionals in the fields of history, museums and the arts. Rowe shared the winning concept with the Board of Visitors today during one of its regularly scheduled meetings on campus.

Sendor is a North Carolina-based architectural designer who entered the competition as a personal project. He graduated from William & Mary in 2011 with a degree in government. He said that during his time at the university, he took advantage of every course related to architecture and architectural history that he could. He received the J. Binford Walford Scholarship in Architecture, and he served as a drafting and architectural research assistant for Susan Webster, Jane W. Mahoney Professor of Art and Art History and American Studies. Sendor received his master’s degree in architecture from North Carolina State University in 2015. He currently works for Cannon Architects in Raleigh, North Carolina.

“When I heard about the memorial design competition, I knew that I had to participate,” Sendor said. “A project of this magnitude and this importance is a rare and incredible opportunity, to be able to contribute to telling the story of — and paying tribute to — the enslaved people is especially close to my heart being an alumnus of the College.”

In his research for the project, Sendor came across a book about institutional slavery in Virginia written by another William & Mary graduate, Jennifer Oast Ph.D. ’09. While reading the chapter about William & Mary, Sendor said he was struck by her discussion of fire and its role in the lives of the enslaved at the university.

“I was inspired by the idea of illumination,” he said. “To figuratively illuminate the forgotten history and memory of these enslaved people who sacrificed and contributed immeasurably to William & Mary for over half of the College’s history, and then to physically illuminate a shared space for community gathering and reflection for generations to come.”

In 2007, the Student Assembly passed a resolution proposed by Tiseme Zegeye ’08 calling for the university to research its role in slavery, make the findings public and establish a memorial to the enslaved. In 2009, the Board of Visitors established the Lemon Project, which has since revealed much about the people who were once enslaved by the university.

In 2014, Lemon Project Director Jody Allen and Ed Pease, instructor of art and art history, taught a course in which students were asked to develop proposals for a possible memorial. Students from that class later helped form the Lemon Project Committee on Memorialization, which continued exploring the idea and recommended the competition. 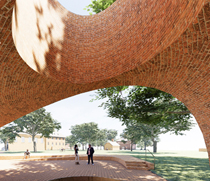 “I am very happy that we have come so far in the process of memorializing the African Americans enslaved by William & Mary,” said Allen. “The memorial is a long time coming. Remembering those who came before is something that we as humans do. We are especially apt to remember and recognize those on whose shoulders we stand. Sadly, this has not always been the case regarding the people enslaved in this country. They have been made invisible. I am proud that W&M is taking this step to move these enslaved laborers out of the shadows.”

The memorial is the latest in W&M’s efforts to more fully recognize and represent the contributions of African Americans to the university throughout its long history. In 2016, W&M renamed two residence halls in honor of African Americans instrumental to the university’s history: Lemon, a man once enslaved by the university, and Carroll F.S. Hardy, a longtime administrator and diversity pioneer at W&M. During the 2017-2018 academic year, W&M commemorated the 50th anniversary of its first African-American residential students with a yearlong slate of special events. In April 2018, the university hung a plaque dedicated to those three women on the Wren Building’s portico. That same month, the W&M Board of Visitors passed a resolution apologizing for the university’s history of slavery and racial discrimination. Earlier this semester, a plaque marking the location of the Bray School, an 18th-century school for black children, was unveiled.

“A decade ago, William & Mary, led by the Lemon Project, began a journey of remembrance and repentance for the university's part in enslaving and exploiting human beings,” said former W&M President Taylor Reveley, who retired in June 2018. “One important aspect of that journey, long nurtured by the Lemon Project, will be this memorial on campus. It is grand to see that a conceptual design for the memorial has now come to fruition. William & Mary was among the first universities to come to grips with its role in slavery, and now it will be among the first to place on campus a lasting testament to the enslaved.”

Now that a concept has been selected, a building committee with faculty, staff, student and Board of Visitors representatives will hire an architect to develop the design. The committee will be co-chaired by Chief Diversity Officer Chon Glover and Sam Jones, senior vice president for finance and administration. A request for proposals for the design part of the process is expected to be issued soon, Jones said. The architect selected for that work will ideally have experience with creating memorials and working in an historic area, he added.

Although the concept proposal suggests a location for the memorial, the exact placement will be determined during the design phase of the project. However, it is expected to be “within or directly engaging with the setting of William & Mary’s Historic Campus,” according to the competition proposal.

Once the design work is complete, a cost can be estimated for the project. After funds are raised, a company will be hired to construct the memorial, and a timeline for completion will be established, Jones said.

The fundraising effort for the memorial is underway, led by private gifts from all of W&M’s living rectors including Jeffrey B. Trammell ’73 who initiated the effort. The Board of Visitors has also promised to match all gifts raised to date and going forward, said Rector John E. Littel. Between private gifts and matching funds, more than $150,000 has already been committed to the project. This will allow the design phase to move forward full speed ahead, Jones said.

“We are honored to be able to contribute to this project so that the men, women and children who were enslaved by William & Mary may be recognized and remembered for all time coming,” said Littel. “The concept that was selected beautifully fulfills the intent of this project, and we look forward to seeing that vision take shape in the months to come.”

The memorial will be an important place of remembrance, said Allen.

“Every time we hold an event at the site, or visitors simply walk by for a closer look, they will see the names of the people who lived and labored here, uncompensated, between the school’s founding and the U.S. Civil War,” she said. “When students see the memorial, I hope they will understand that while W&M participated in an abominable institution, it is now making a genuine effort to address its past wrongs and move forward as a place that is sincerely committed to building and sustaining a truly inclusive community.”

Donations for the memorial may be made online.