by Erin Zagursky |  April 22, 2010
William & Mary is among the country's most environmentally-responsible colleges, according to The Princeton Review's first-ever "Guide to 286 Green Colleges."

Developed by The Princeton Review in partnership with the U.S. Green Building Council, the guide is the first, free comprehensive guidebook focused solely on institutions of higher education who have demonstrated an above average commitment to sustainability in terms of campus infrastructure, activities and initiatives. 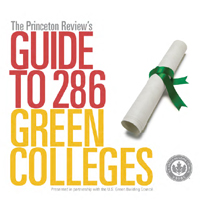 "William & Mary's success in the area of sustainability is a prime example of our ability to achieve much with few resources," said Lynda Butler, co-chair of the College's Committee on Sustainability. "The College is strongly committed to its sustainability efforts and has made great strides thanks to the hard work and dedication of hundreds across campus."

The guide, which can be downloaded at http://www.princetonreview.com/greenguide and www.usgbc.org/campus, looks at an institution's commitment to building certification using USGBC's LEED green building certification program; environmental literacy programs; formal sustainability committees; use of renewable energy resources; recycling and conservation programs, and much more.
According to the school's entry in the guide, "At the College of William and Mary, student research and institutional initiatives toward sustainability go hand-in-hand." The "green highlights" include efforts by the Committee on Sustainability, projects made possible by the student "green fee," students who saved the College $40,000 by auditing campus recycling, students designing and testing solar cells, and participants in the Student Environmental Action Coalition, the Eco-House, and the Sharpe Community Scholars Program building green roof test plots.

"Students and their parents are becoming more and more interested in learning about and attending colleges and universities that practice, teach and support environmental responsibility," said Robert Franek, senior vice president and publisher of The Princeton Review, in a press release. "According to our recent College Hope & Worries Survey, 64 percent of college applicants and their parents said having information about a school's commitment to the environment would impact their decision to apply to or attend it. We created this Guide to help them evaluate how institutions like William & Mary focus on environmental responsibility so that they can make informed decisions as they move through the college assessment and application process."

William & Mary launched a campus-wide initiative in 2008 to improve environmental sustainability at William & Mary. In spring 2008, students elected to charge themselves a "Green Fee" that would go toward facility improvements, student grants for research on environmental issues and a "Green Endowment." In fall 2008, President Taylor Reveley appointed a Committee on Sustainability (COS) to administer the fee, which raises more than $200,000 annually. Today, the committee is one of the largest on campus and includes more than 100 staff, faculty, students and administrators in three subcommittees and 10 working groups. The College recently launched a new green effort, which asks every person on campus to "Do One Thing" in support of sustainability. The campaign makes William & Mary the country's first "DOT" university. During the College's Earth Day celebration, Reveley will announce that the university's overall DOT commitment will be to create an on-campus eco-village.