William & Mary has the highest percentage of undergraduates participating in study-abroad programs compared to any other public university in the United States, according to a report released Nov. 18 by the Institute of International Education (IIE). This is the eighth time in the last 11 years that the university has held that distinction.

Open Doors 2019, published by IIE in partnership with the U.S. Department of State’s Bureau of Educational and Cultural Affairs (ECA), highlights the impact of international education on the U.S. higher education sector, examining the numbers and profile of international students in the United States in 2018-2019 and of U.S. students receiving academic credit for study abroad in 2017-2018.

The university is a leader among global education even when compared with private universities, ranking 16th in the report’s list of top 40 doctorate-granting institutions, both public and private, maintaining its rank as 16th (with a 53.6% participation rate) in 2016-2017.  The only other doctorate-granting institution in the top 40 from the commonwealth is the University of Virginia (ranked 37th with 42.8% participation). The chart is online. 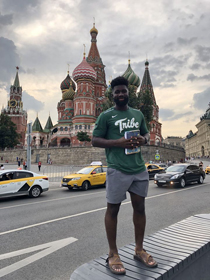 “William & Mary's number one ranking among public universities for study abroad participation is a wonderful reflection of the high priority we place on promoting in-depth understanding of diverse global contexts," said Stephen E. Hanson, vice provost for international affairs and director of the Reves Center for International Studies. "I am truly proud to work at a university with such dedicated and globally-minded faculty, students, staff and alumni.”

William & Mary’s Reves Center for International Studies offers students a diverse selection of study-abroad opportunities through the Global Education Office (GEO), including more than $650,000 annually for study abroad scholarships as one of many efforts to reduce financial barriers. Students receive support, information, resources and guidance on various study-abroad programs and international university exchanges through GEO, which also provides workshops, peer advising and re-entry assistance for students returning from their study-abroad experience

“Study abroad contributes deeply to the vision of a liberal arts education and the undergraduate curriculum at W&M and has become integral to the W&M education of so many of our students,” said Sylvia Mitterndorfer, Director of Global Education for the Reves Center. “We are expanding access to transformational global experiences through significant increases in scholarship funding, enhanced program choices for all majors, and new programs in locations traditionally underrepresented in study abroad. Recent new study abroad programs are designed to enhance curricular choices, especially in STEM, and deepen our collaboration with new partners, specifically in sub-Saharan Africa and Latin America. While we have enhanced choices by offering study abroad programs at more times during the year, we continue to value and sustain long-term study abroad opportunities, as reflected in ranking ninth nationally for long-term study abroad participants among all doctoral-granting universities.”

IIE President and CEO Allan Goodman said, “The record numbers of international students in the United States and U.S. students studying abroad mean that more students than ever before are being exposed to new ideas and ways of thinking. They will have greater ability to succeed in and contribute to an increasingly complex and interconnected world.”

International students in the U.S. 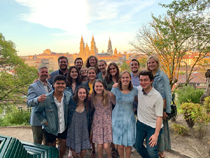 According to data from NAFSA: Association of International Educators, international students and scholars in the Williamsburg area in 2017-2018 had more than a $35.9 million impact on the 2nd U.S. Congressional District’s economy, supporting 538 jobs.

Eva Wong, director of International Students, Scholars and Programs (ISSP) at the Reves Center, notes that the significance of an international academic community lies at the core of the mission of a university.

“International students, scholars, faculty, staff and their families are a valuable asset to W&M,” she said. “They make our university a truly global one by bringing diverse perspectives and talents to our classrooms, offices and lecture halls. They also provide important international linkages and networks that allow us to create partnerships, global research opportunities, and cutting edge programs. Therefore, it is essential that we continue to be a welcoming community, first as an institution and then at the national level.”