Rowe, who became the university’s 28th president on July 1, said an early priority was to ask the former U.S. defense secretary and CIA director to stay on for a second term as chancellor. Pending formal approval by the Board of Visitors later this month, Gates will begin that second term July 1, 2019.

“Chancellor Gates has been an exceptional ambassador for his alma mater over the past seven years and has been a tremendous resource for me during the presidential transition,” Rowe said. “The Chancellor wears his formidable experience and intelligence humbly, and he is very generous with his time to William & Mary. We are delighted he has agreed to continue in this important role.” 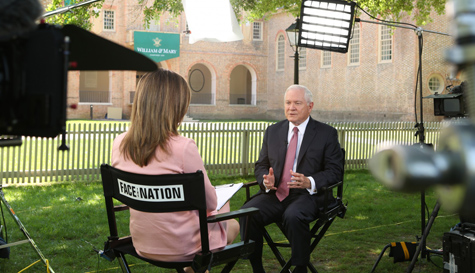 Gates was invested as the university’s 24th Chancellor in 2012. Although the position is primarily a ceremonial role, Gates has been very active on campus since his investiture. He frequently takes part in W&M’s traditions, such as Homecoming, Charter Day and Commencement, keynoting the 2015 W&M Law School diploma ceremony and helping to commission students graduating from the school’s ROTC program. He has also shared with William & Mary students his international affairs expertise through question-and-answer sessions with the university community and has participated in media interviews at the Wren Building, garnering the university national airtime.

Gates, the first W&M alumnus to serve as Chancellor of the university in the modern era, donated his personal papers — which span his time at the CIA and as secretary of defense, among other positions — to the university’s archives in W&M Libraries. He and his wife, Becky, have also committed a gift from their estate that, at the time of the announcement, was estimated to be $1.5 million. Most of that gift will go toward the Reves Center for International Studies for merit-based awards to outstanding students with a declared major in international relations, global studies or Africana studies for study abroad. A portion of the gift will also go toward cataloging and digitizing his papers. 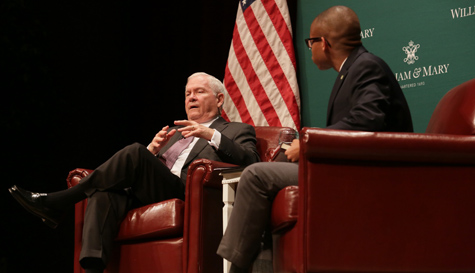 “Robert Gates has been an advocate of the first magnitude for William & Mary,” said Rector John Littel P’22. “He is a champion of the value of excellence in higher education and of public service, both of which are core to William & Mary. We could not be more pleased that Dr. Gates has agreed to continue as Chancellor for a second term.”

Gates majored in history at William & Mary before entering a career in public service, joining the CIA, where he served for 27 years and under six presidents. He served as deputy director and later director of the agency before becoming president of Texas A&M University in 2002. He started as the nation’s defense secretary in 2006 and remained in that role until 2011, becoming the only person to ever hold that position under two presidents of different political parties. In total, Gates served eight presidents of both political parties.

Gates served as president of the Boy Scouts of America from 2014 to 2016. Earlier this year, he became chairman of Eisenhower Fellowships, an independent, nonpartisan, nonprofit international leadership organization. Gates is also currently a principal with the consulting firm of RiceHadleyGates LLC. 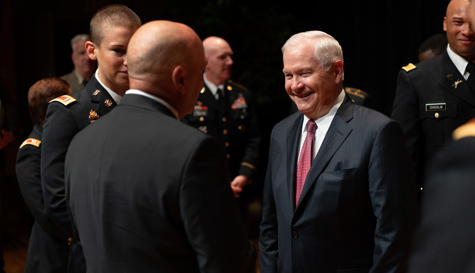 “I am delighted to be invited by President Rowe to continue as Chancellor at William & Mary,” said Gates. “The university helped greatly in shaping me as a person and informed my career in public service. As Chancellor, it has meant so much to share this close relationship with a new generation of William & Mary students, who are deeply impressive, as well as President Emeritus Taylor Reveley and now President Rowe. I will be honored to continue to serve this institution that has served me so ably.”

Gates has received multiple accolades throughout his career, including the Presidential Medal of Freedom. W&M presented him with an honorary degree in 1998 and an Alumni Medallion in 2000.