When Cyclone Nargis struck Myanmar’s Irrawaddy-Salween Delta in 2008, it killed nearly 140,000 people and left more than 2 million residents of this low-lying region homeless.

A joint U.S.-Myanmar research team is now using a two-year, $545,000 grant from the National Science Foundation to study the geologic and oceanographic processes that control the fate of this vulnerable coastal area and its 50 million inhabitants. To put the grant award in perspective, the U.S. and U.N. provided about $335 million in emergency response and recovery funds in the months following Nargis’ tragic landfall.

Leading the U.S.-based team are professors Steve Kuehl and Courtney Harris of William & Mary’s Virginia Institute of Marine Science, along with North Carolina State University professor and VIMS alumnus Paul Liu. The Myanmar contingent is led by professors Day Wa Aung of the University of Yangon and Yin Yin Aye of Mawlamyine University. Also contributing are VIMS post-doctoral scientist Josh Williams and a number of graduate students from VIMS and NCSU.

Day Wa Aung, head of Yangon University’s Department of Geology, says he is “excited about the collaborative research, student and scholar exchange, and training programs,” and notes that the U.S. collaborators are “the first Western marine scientists to work offshore with us.” 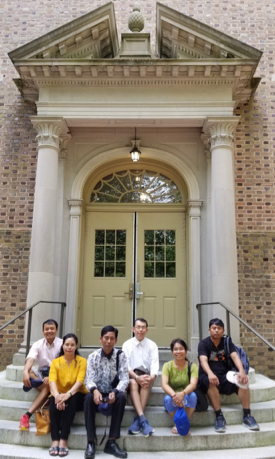 Harris agrees that the project has broad merit. “Scientifically it’s certainly important,” she says, “but there is also a cultural element in that research meetings have been held in both countries.”

Adds Kuehl, “We want to engage our Myanmar collaborators in the research project to the fullest extent. The project has also provided the opportunity to expose them to the U.S. and our culture, and likewise given us the opportunity to explore Myanmar. It’s capacity building and training and developing collaborative links — science as a tool to be good citizens and good neighbors.”

The Myanmar team wrapped up a three-week trip to the U.S. in mid-May, which included visits to both the VIMS and NCSU campuses, and field trips to Virginia’s barrier islands, the Outer Banks, and Washington, D.C. At VIMS, Kuehl, Harris, Williams and graduate student Danielle Tarpley introduced the group to the instruments and techniques they use in their sediment and computer modeling labs. At NCSU, Liu and his students offered training in the processing and interpretation of seismic data.

“We were basically trying to show them what we’re doing with the samples and data we collected during our cruise last December,” says Kuehl, “how we’re age-dating the sediment cores, analyzing for elemental ratios and extending our findings with models.”

The team’s scientific goal is to use field studies and computer modeling to better understand and predict how the Irrawaddy-Salween Delta will respond to expected changes in sediment supply and coastal dynamics due to climate change and human development in the watersheds of the two rivers. The Irrawaddy is the world’s third largest river in terms of sediment discharge, and together with the Salween delivers more than 600 million metric tons of mud, silt and sand each year to Myanmar’s delta region and the nearby Andaman Sea and Gulf of Martaban. 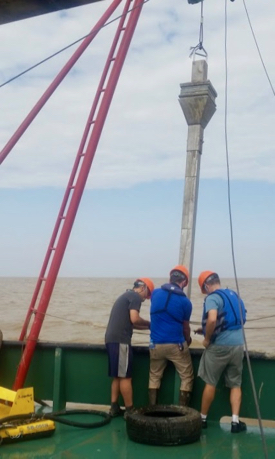 “One of the reasons we’re interesting in looking at this system,” says Kuehl, “is that it’s the last major unknown delta system in the world. It’s also in a relatively natural state in terms of its sediment supply.”

The scientists’ concern — shared by local citizens and global organizations alike — is that recent dam building and other human activities along the two rivers will decrease the amount of sediment available to maintain Myanmar’s low-lying delta plain. The country is currently planning to build as many as 45 dams, including seven major impoundments in the headwaters of each river drainage. The main purpose of these dams is to produce hydropower — sorely needed in a nation where only half the households have electricity.

“If you want to understand and predict how sediment starvation and sea-level rise may impact this region, you need to know how mass is partitioned across the delta,” says Kuehl. “Understanding the mass balances and the sediment budgets in relation to sea-level change is key. It is one of the first order questions you need to ask.”

The team’s fieldwork and computer modeling is designed to characterize where sediments accumulate and the mechanisms that move them, baseline knowledge that is crucial to understanding how the rivers, delta, and shoreline may respond to future changes. During last December’s two-week cruise on the Andaman Sea, the researchers mapped the past and present distribution of different sediment types. They are analyzing those data now. In a related project funded by the Office of Naval Research, a team from University of Washington is collaborating with scientists from Myanmar to monitor the amount and types of sediments the Irrawaddy carries into its delta.

In describing possible scenarios, Kuehl asks, “Is all the sediment being trapped in the delta plain, perhaps so that it’s just keeping up with sea-level rise? If so, if you dam the rivers you are going to lose the delta land pretty quickly. Or is most of it going offshore? The offshore part of the delta is like a foundation, the platform on which the rest of the delta grows seaward and upward over time. Losing sediment there would undermine that foundation and might cause the delta to recede.”

One feature that particularly intrigues the research team is that the offshore, submerged portion of the Irrawaddy-Salween Delta exhibits two drastically different forms.

“These two large rivers discharge into the ocean within a few hundred miles of each other,” says Harris. “Off the mouth of the Irrawaddy you have a shelf that ramps seaward from the river delta. But off the Salween, you have a funnel-shaped estuary. It’s like you have the Mississippi Delta right next to the mouth of Chesapeake Bay. Why do you have such different forms of these rivers within a couple of hundred miles?”

One likely explanation stems from the region’s geology.

“There’s a fault that runs right through the system,” says Kuehl. “You may have uplift on one side and relative subsidence on the other that create different sediment-dispersal patterns and geometries.”

“We timed our December cruise for right after the end of the monsoon season,” says Kuehl, “when seas are calmer but monsoon-derived sediments still cloud offshore waters.”

Whether the fate of the Irrawaddy-Salween Delta depends on geology, monsoons, sea-level rise, sediment starvation, or most likely a combination of all these factors, one thing is clear: a better understanding of these dynamic systems can have worldwide benefits.

Says Kuehl, “Half a billion people live on river deltas — in cities like Bangkok, Dhaka, Ho Chi Minh City, New Orleans, Shanghai and Yangon — and many of these regions are now considered at risk. To understand and predict the fate of these areas and people, we need to know how river sediments are transported and delivered to the onshore and offshore parts of the delta, as this is the material from which deltas arise.”