When Bob Trice ’68 and Susan Saulmon Trice ’68 were undergraduates at William & Mary, learning a foreign language was as close as they came to an international experience. Neither was able to study abroad, but they wanted more for their own children. The Trices eventually began traveling internationally as a family tradition. Their destinations included Europe, Tanzania, Botswana, South Africa, Australia, New Zealand, Israel, Jordan and the Galápagos Islands. It allowed their two children to see life through an international lens, which gave them a competitive edge once they entered the workforce.

Now the Trices want to provide the same opportunity for current and future William & Mary students. 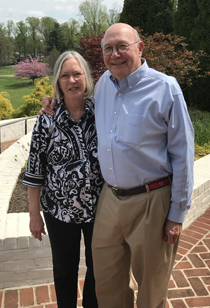 The Northern Virginia couple has given a seven-figure gift to fund endowments and need-based fellowships/internships, among other priorities, in William & Mary's Institute for the Theory & Practice of International Relations (ITPIR) and Public Policy Program. The endowments will support international experiential learning and research.

“We think the interdisciplinary approach is key to teaching students how to adapt to a changing environment,” Bob Trice said. “When you bring together government, economics and international relations, you give them skills which very few other American students have. Then you add the international environment to that — it’s definitely a positive discriminator in the marketplace for William & Mary students.”

ITPIR’s Shark Tank competition and the Summer Fellows program will benefit from the Trice gift. The Shark Tank competition gives students an opportunity to receive funding for their own research interests if the judges select their ideas. The Summer Fellows program, which now focuses on assisting nongovernmental organizations, governments and researchers in developing countries in the use of spatial data, will also now be expanded. About six students a year will benefit from the Trice’s gift to ITPIR.

“It wasn’t obvious to us how we were going to fund those types of programs and now the Trices have made that possible in a sustainable way,” said Michael Tierney, director of ITPIR. “Their generosity is phenomenal and will pay dividends for William & Mary students for decades.”

“Although I had worked in other research labs at the university, I never felt as engaged or intrigued as I did by the prospect of starting my own work,” Harmon said. “Shark Tank has given me an otherwise unavailable method to engage in policy-relevant research that I came up with.”

In 2015, Lu Sevier ’16 traveled to the Philippines on a Summer Fellows (AidData) trip to create street maps that highlight health facilities, emergency centers and evacuation locations in the instance of a typhoon or other crisis.

“Being a part of AidData was the reason that I felt like I belonged at William & Mary. Going abroad and working with them for three years is definitely what set me on the trajectory that I’m on now,” said Sevier, who now works at Booz Allen Hamilton on a software development team. “I really would like to thank the people who gave money to allow other students to have this opportunity.”

Graduate students pursuing the international development track of the public policy program must participate in a 10-week summer internship abroad between their first and second years of the program. Public Policy Director Sarah Stafford says the timing of the internship is designed so that students can apply what they have learned in their first year in the program to what they learn in the field. This combination provides them with a richer set of experiences to bring to their second-year classes.

“The Trices really wanted this money to make a difference by giving students an opportunity they wouldn’t otherwise have,” Stafford said. “They wanted all students in the international track to have the chance to work in another country in a government position, at a nonprofit or to have the opportunity to participate in a faculty-led research project — not just observing, but participating in the public policy process in some way.”

For example, this summer Austin Behr ’18 will be interning with the Maasai American Organization in Kenya. He will be working on their Megwarra Water Project and providing a geospatial analysis of the community, conducting a survey of stakeholders and helping the organization apply for grant funding, Stafford said.

The Trices’ endowment is designed to fund approximately 10 students in the public policy program per year.

In addition to their continued generosity, the Trices are very active leaders in support of their alma mater. They represent Arts & Sciences on the Campaign Steering Committee, and also serve on the Washington, D.C., Metro Regional Campaign Committee. The Trices have been past reunion volunteers and will serve as co-chairs of their 50th Reunion next year, along with other classmates. Bob Trice has been a key member of the Public Policy Board of Advisors and is currently serving as its president.

“The Trices’ continued investment in William & Mary students is not only extraordinary, but admirable,” said Vice President for University Advancement Matthew T. Lambert ’99. “Their generous gift creates international work and research experiences that will greatly impact students’ perspectives on the world and complement their world-class William & Mary education.”