When Daria Grastara ’17 arrived at the National Archives in Washington, D.C., on Wednesday morning, she was surprised that the Presidential Precinct gave her free rein to document, through tweets and Instagram posts, the next six hours of its global affairs event, which included a visit from Prince Charles.

“It was just so exciting that they trusted me based on what I’d told them I’d been a part of,” she said later. “It was just another amazing experience.” 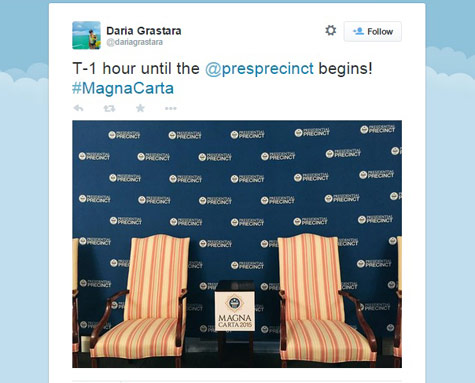 Grastara, an English and government double major, is currently attending the William & Mary in Washington program, where the semester’s theme is “Politics in the Era of Social Media.” So when Assistant Government Professor Jaime Settle asked if any students wanted to be involved in the social media aspects of “Magna Carta 2015: Global Empowerment Through Rule of Law,” she and her roommate, Maizie Nelson ’16, jumped at the chance.

The event was sponsored by the Presidential Precinct, a consortium founded by W&M alumnus and former rector James B. Murray, Jr., J.D. ’74, LL.D. ’00. Founded in 2013, the precinct is comprised of William & Mary and the University of Virginia, William Short’s Morven and the homes of three Founding Fathers: Thomas Jefferson’s Monticello, James Madison’s Montpelier and James Monroe’s Ash-Lawn Highland.

The event united young leaders from 20 nations with dignitaries and experts from academic, business, government and civil society to talk about how the Magna Carta and the rule of law applies – 800 years after its creation – to economic development and transparency, gender equality and women’s empowerment, and climate change. 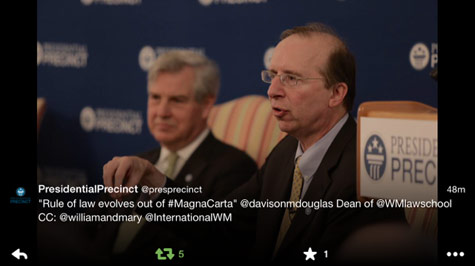 And although neither Nelson nor Grastara met Prince Charles, William & Mary was heavily involved with the event. Murray offered introductory and final remarks, while Davison M. Douglas, dean of William & Mary Law School, moderated the economic development discussion, and Stephen Hanson, vice provost for international affairs and director of the Reves Center for International Studies, moderated the session on gender equality.

Nelson, a history and environmental science and policy double major, worked before the event to promote it at both William & Mary and the University of Virginia, reaching out to student groups and alumni interested in global development, law, international affairs, sustainability or gender and women’s issues.

“It was a good experience,” she said, “trying to build excitement for an event, to get press to attend and get people to watch.” Through the W&M in Washington program, Nelson interns in a public relations firm, which often faces the same types of challenges that she met in terms of timing and getting people’s attention. 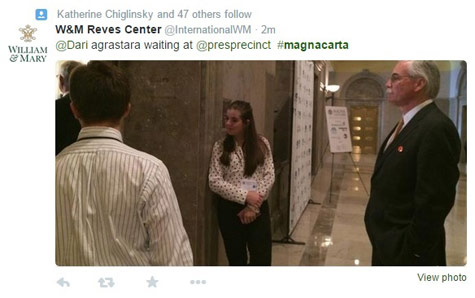 In total, the event hosted over 70 people, while more than 1,500 others in 34 countries watched the live stream, according to the Presidential Precinct.

Grastara’s work was also an extension of her internship in the House Republican Caucus’ communications office, where she handles social media in addition to other duties. But even then, she said she might tweet once a day, or occasionally shoot a picture and have it approved to upload to Instagram.

In contrast, on Wednesday she was writing multiple drafts of tweets and deciding on the fly which best represented the event at the same time she was shooting, editing and posting photos. “This was minute-by-minute,” she said. “I had to be on top of things and had to be listening thoroughly to every speech.”

She also had an opportunity to see how some of the representatives from other countries use social media to inform and inspire their countries, as does Lulu Haangala, a 2014 Mandela Washington Fellow from Zambia who was also at William & Mary last year when the Presidential Precinct hosted the Young African Leaders Initiative.

“Social media is so powerful, you can shape an issue with just one tweet,” Grastara said. “What (Haangala) was telling me is that social media, for her, is a way to share with her community what is going on in the rest of the world. 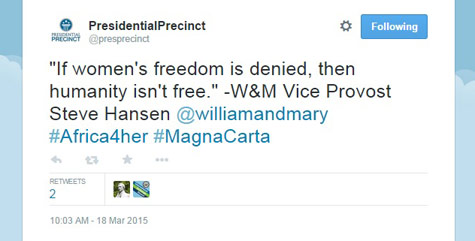 “That’s what today was about, too. Human rights, women’s rights, protecting the environment, these are all concerns that every country has in some measure. All the guests today had those concerns, and it was great to hear people connect in ways they wouldn’t normally.”

In the end, she said she had to keep her focus steady on the main points of the event. Because it was a feast of riches intellectually, she worked to not bog down in minutiae.

“While I was tweeting, I was thinking, ‘This is an amazing thing.’ There are these little sentences that really represent the speaker and showcase what the whole day was about,” she said. “At the end of the day, you have to remember what the point of this whole event was, what it did for all of these representatives from around the world and what it means that William & Mary can be a part of this.”