During a period of 100 days 20 years ago, more than 800,000 Rwandan Tutsi and moderate Hutu people were systematically murdered in a campaign planned by members of a political group known as akazu, many of whom were top government officials.

Some students at William & Mary, and elsewhere in the United States, have vowed never to forget that atrocity and to make genocide prevention a priority. To that end, the William & Mary chapter of STAND, a student anti-genocide coalition, in conjunction with the Africana Studies program and W&M’s International Performance Arts eXchange (IPAX), constructed a commemorative exhibit in the Crim Dell meadow on April 18 as part of Genocide Awareness Month.

“I'm just hoping to raise awareness,” said Olivia Parker ’14. “A lot of people don’t know this is the 20th anniversary of Rwanda, which is really surprising to me. I want people to know that this isn’t over. We keep saying, ‘Never again,’ but it keeps happening. A lot of people just don’t know – and if they did, maybe they’d care a lot more.”

Students were offered information leaflets and a chance to sign a petition endorsing Senate Resolution 375. Among other things, the resolution calls for President Barack Obama to work with international partners to develop “a long-term United States strategy in support of international and domestic efforts to establish a durable peace and greater security for the Central African Republic and to enhance regional stability.”

“One thing we’re trying to do is express that there’s connection between what’s happened in Rwanda and what’s currently happening in the Democratic Republic of the Congo,” said Chelsea Strelser ’14, one of the exhibit’s organizers. “A lot of violence has shifted from Rwanda to Congo.”

Strelser explained that more than 5 million people have died in the eastern part of the Democratic Republic of Congo since 1991 due to war-related disease, famine and violence. In addition, Strelser cited a statistic that more than 1,100 women there are raped daily, and millions have been displaced from their homes.

At the root of the conflict is the multi-million trade of “conflict minerals,” which have enriched militia leaders and war profiteers, Strelser said. Those minerals – gold, tin, tungsten and tantalum – are used in the manufacture of electronics. Strelser said that one of the goals of STAND was to encourage all consumers, whether a university, the public or a nation, to take a much closer look at electronic manufacturers and where the minerals they use come from. 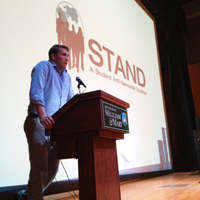 “Simply by doing that,” she said, “we can take away the money these armed groups are using.”

Jake Sprang ’14, another event organizer, said it was easy for him to think that the United States government didn’t care about the issue of genocidal atrocities until he met and spoke with Russ Feingold, former senator from Wisconsin and now U.S. special representative for the African Great Lakes region and the Democratic Republic of the Congo. Feingold told Sprang that his interest in the region was fueled by information he received from college students.

“The Great Lakes region is Congo, Rwanda, South Sudan, Central African Republic of Burundi, all of which are facing instability and are either undergoing mass atrocities or have that potential,” Sprang said. “By working with Feingold, I learned how he had been inspired by students to get involved with the Great Lakes region because of the things he had heard were going on there.

“Our voices can be heard and I hope we can show students that even though a task may seem big, we can contribute to a solution even on a small level.”