George Clooney’s new movie The Monuments Men may only be based on a true story, but William & Mary was once home to real-life Monument Man Everett Parker Lesley, Jr. 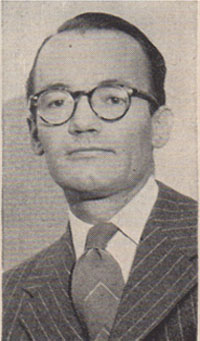 The Monuments Men were a group of around 345 men and women from 13 nations, most of whom volunteered for service during World War II. These experts were museum directors, curators, art historians, artists, architects and educators. Their goal was simply to protect cultural treasures as much as war would permit.

The name “Monuments Men” was shortened from the Monuments, Fine Arts, and Archives (MFAA) section of the Roberts Commission, a group approved by President Franklin Delano Roosevelt in 1943 and headed by Supreme Court Justice Owen J. Roberts.

Lesley was a captain with the Monuments Men immediately following the end of the war. Prior to joining this military unit, he was a distinguished scholar and professor of art and architecture at the University of Minnesota.

Assigned to several posts in Germany including Frankfurt and Bad Nauheim, Lesley helped write – and later signed – the Wiesbaden Manifesto in 1945.  This letter, signed by 25 officers within the Monuments Men, objected to the U.S. government’s decision to transport 202 German-owned works of art to the National Gallery of Art in Washington, D.C. for safekeeping. In 1948 the works in question were returned to Germany.

In April 1946, Lesley accompanied a restitution train from Nuremberg to Cracow, Poland. This shipment included some of the most important artworks stolen from Poland during the war, such as the Veit Stoss altarpiece from the Church of Our Lady in Cracow and Leonardo da Vinci’s Lady with an Ermine, from the Czartoryski Collection.

From 1946-47, Lesley was chief of the restitution branch in the Office of Military Government for Greater Hesse, Germany.

Following his service with the Monuments Men, Lesley studied at New York University. In the early 1950s he became the Acting Director of the Norfolk Museum of Arts and Sciences (which would become the Chrysler Museum of Art) as well as an assistant professor of art at the Norfolk Division of the College of William & Mary. In 1959 his title was changed to Professor of Art, a position he would hold until 1979, as the Norfolk Division would become Old Dominion University.

For his role in the preservation of art and culture in Europe, Lesley was awarded Chevalier, Order of Poland Restored in 1946. He also earned the Honorary Medal of Art & Science, House Order of Orange-Nassau from the Netherlands in 1947.