Due to an illness, Maya Angelou has canceled next week’s speaking engagement at William & Mary. 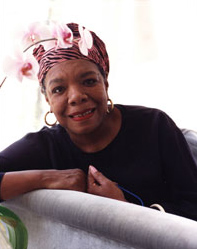 The event, which was to take place April 15 at William & Mary Hall, will not be rescheduled.

“I know that many members of the William & Mary and Williamsburg communities were looking forward to hearing from Dr. Angelou,” said Chase Koontz ’14, president of the W&M Student Assembly for 2013-14. “It is unfortunate that the event has been cancelled, but we are certainly sympathetic as to why. I know I speak for the entire community in wishing Dr. Angelou a quick recovery.”

Individuals who ordered tickets with cash at the Tribe Ticket Office in William & Mary Hall must return the tickets no later than close of business on Friday, April 18 and produce a valid photo ID to the box office to receive their refund. The Tribe Ticket Office is open for normal business hours, Monday through Friday 8:30 a.m. to 5 p.m.

Angelou, an acclaimed author and poet was invited to speak at William & Mary as part of “I am W&M” week, which celebrates the diversity of the campus community.

“Although Dr. Angelou’s engagement has been cancelled, I encourage everyone to take the opportunity to reflect on her life’s story and be inspired by her works,” said Koontz. “Read her poetry, listen to her spoken word and celebrate her compassion for others during the scheduled events of ‘I am W&M’ week.”