Photo - of -
by Ellie Kaufman, AidData |  April 4, 2014
William & Mary’s AidData was one of 32 cornerstone partners to collaborate with the United States Agency for International Development (USAID) on its launch of the Global Development Lab on April 3 in New York City.

The lab aims to advance a science-  and technology-based approach to development by merging two offices within the agency, bringing in corporate, nonprofit and university partners and reallocating funds to make the initiative a reality. 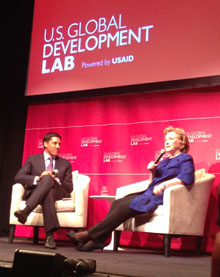 William & Mary’s research and innovation lab, AidData, is one of the cornerstone partners working to create revolutionary solutions to end extreme poverty with the Lab. AidData began working with USAID through a cooperative agreement as a part of the Higher Education Solutions Network in 2012.

With former Secretary of State Hillary Clinton in attendance, Pat Austria ’13 spoke at the lab’s launch event. She discussed her work as a student research assistant, geocoding -- or tagging -- the locations of specific development projects, and explaining how that process can make policy coordination a reality. Austria now works as a consultant at the World Bank.

“I think it’s really exciting for the College that we are getting this recognition of the work we are doing with geocoding,” Austria said. “William & Mary has always been able to bring the best out of its students and to let them think creatively. To be able to elevate that to the USAID Global Development Lab is exciting and well-deserved for the work AidData and William & Mary has done in the field so far. And it’s only just beginning.”

Vice Provost of International Affairs Steve Hanson and Director of the Institute for the Theory and Practice of International Relations (ITPIR) Mike Tierney represented the university at the event.

“Pat Austria confirmed that what we are doing at AidData is actually making a difference in the lives of individuals in developing countries,” Tierney said. “The Global Development Lab will provide AidData with a much wider range of collaborative partners. I expect this initiative will enhance our impact and effectiveness.”

The new lab merges the Office of Innovation and Development Alliances with the Office of Science and Technology at USAID. Funds were reallocated within the agency to open the lab. In 2008 USAID spent roughly $127 million on research and development. With the launch, the agency will now spend $611 million on research, innovation and applied solutions in science and technology.

Joining the university as cornerstone partners in the lab are Nike, Walmart, Save the Children, Catholic Relief Services and other universities. The partnership does not signify a financial commitment from each partner.

“It represents an agreement to really work together to take transformative solutions to hundreds of millions of people,” Lona Stoll, senior advisor to USAID Administrator Rajiv Shah told Devex.

The new lab offers an opportunity for the innovative research originating at the university to join the work of other organizations in creating solutions to development challenges.

“Ranging from the newly formed USAID data and analytics office, where William & Mary students will intern this summer, to the evaluation unit, William & Mary has an exciting chance to be part of the next leading wave of international development initiatives,” AidData Director of Operations David Trichler said.