The College of William & Mary remains one of the top producers of Peace Corps volunteers, according to a ranking released by the organization today. 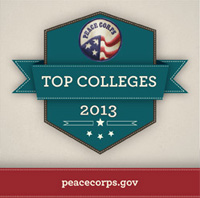 “William & Mary provided me with a great opportunity to learn and practice leadership skills,” said Allen Koji Ukai ’10 in a Peace Corps press release. Ukai is working as a community business volunteer in El Salvador. “My majors in sociology and public policy also provided me with a great background to the various socioeconomic issues I see on an everyday basis.”

The annual ranking produced by the Peace Corps categorizes schools according to the size of their student bodies. The medium-sized school category includes schools with 5,000 to 15,000 undergraduates. With an undergraduate population of approximately 6,100, William & Mary makes an impressive showing on the list alongside schools with much larger populations. Last year, the university ranked eighth on the list of medium schools with 37 volunteers.

More than 8,000 Peace Corps volunteers are currently working in 76 countries around the world.

“Every year, graduates of colleges and universities across the United States are making a difference in communities overseas through Peace Corps service,” said Peace Corps Acting Director Carrie Hessler-Radelet in the press release. “As a result of the top-notch education they receive, these graduates are well prepared for the challenge of international service. They become leaders in their host communities and carry the spirit of service and leadership back with them when they return home.”

A Peace Corps information session will be held at William & Mary on Feb. 15 from 4 to 5 p.m. in Room 1027 of the Mason School of Business. For more information, contact Alyson McReynolds at amcreynolds@peacecorps.gov.