Former British Prime Minister and William & Mary Chancellor Margaret Thatcher passed away on Monday at the age of 87.

“Margaret Thatcher was a great force in British and world politics,” said William & Mary President Taylor Reveley in a statement. “She was also a cherished member of the William & Mary family, serving splendidly and inimitably as our Chancellor for seven years.  We will miss her enormously and deeply mourn her loss.” 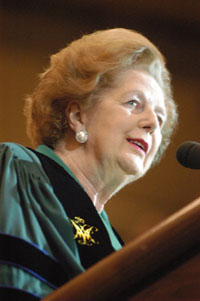 The Chancellor’s regalia was redesigned that same year to celebrate the College’s tercentenary and to better reflect the prestige of the Chancellor position. Thatcher was the first to wear the new regalia.

Throughout her term as Chancellor, Thatcher visited the campus on several occasions, interacting with students and faculty members and advocating for the university.

“She went to Richmond on our behalf,” said Louise Kale in a 2012 W&M News story. “She lent herself to fundraising appeals. She was a real presence at William and Mary, especially when you compare her to the Colonial chancellors or to George Washington, who agreed to accept the office of Chancellor only after being reassured that he would not have to travel to Williamsburg. The College – everybody at the College – related to her in a personal way.”

Upon the conclusion of Thatcher’s term as Chancellor in 2000, W&M President Timothy J. Sullivan said, “Lady Thatcher, we will never forget the vital lessons that you have taught, or cease to feel the powerful inspiration that you have given in the cause of liberal learning, in the service of freedom and in the rich and noble history of English-speaking peoples. You have captured our hearts, strengthened our resolve and changed our lives--and as a consequence we will never be the same." 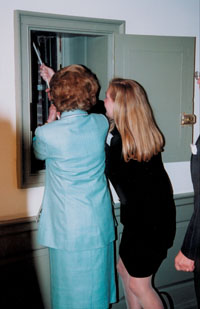 Thatcher had similar feelings of admiration for the College. In a letter to Sullivan that year, she wrote, “It has been a singular honour, and a great joy, to work with you all. The education given at the College is outstanding.  Altogether it has been a momentous seven years and a privilege to be part of the history of the College of William & Mary.”

A portrait of Thatcher, commissioned by William & Mary, was completed and unveiled during the 2000 Charter Day ceremony. The following year, the portrait was dedicated on the last day of classes. During the dedication ceremony, the Class of 2001 made Thatcher and honorary member, and she joined the seniors in the tradition of ringing the Wren Bell.

Marcus Hicks '00, who served as the president of the Student Assembly, spent time with Thatcher during the 2000 Charter Day ceremony.

"Despite all of her accomplishments, I remember her as a kind and remarkably humble individual," he said. "As student body president, I presented her with a Student Assembly Resolution of Appreciation, thanking her for her service as Chancellor of the College.  As I escorted her to the University Center, she turned to me and said, 'You are a true gentleman. At the unveiling of her commemorative portrait, Lady Thatcher was very appreciative and grateful of the honor. During my moments with her, I remember thinking how someone with such poise and grace earned the moniker of the 'Iron Lady.' The class that she exuded just made me respect her more. I am deeply saddened by her passing, but will forever remember my time with her at the College of William & Mary."

Even after she left William & Mary, the College remained on Thatcher's mind and in her heart. In a 2003 letter to Sullivan, she wrote, “I have so many cherished memories of William and Mary over the years – of the faculty and especially the students – and will always look back on my time as Chancellor with great happiness.”

Thatcher’s portrait, which has traveled around the world since its unveiling, returned to the College last year and now hangs in the Wren Building. In it, Thatcher forever sits proudly adorned in green and gold.