Hope has arrived again in the Virgin Islands.

This is the fifth year that the whimbrel has returned to her wintering grounds on St. Croix, one of the U.S. Virgin Islands. The Center for Conservation Biology follows a number of these extreme flyers through satellite tracking devices, but Hope’s transmitter was removed by CCB biologist Fletcher Smith in November 2012. Smith said Hope’s transmitter malfunctioned after four years of service, tracking the movements of the bird over more than 62,500 miles.

Despite the loss of the transmitter, Hope was easily spotted at Southgate Pond by Lisa Yntema, a local ecologist on St. Croix who has collaborated with CCB researchers often in the past. 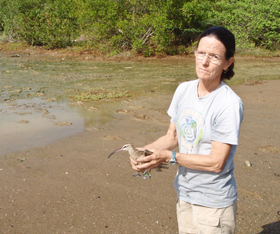 We left Hope’s leg bands and her identifying coded flag in place for future identification,” explained Bryan Watts, director of the Center for Conservation Biology. He added that Yntema’s report is the first time that the bird has been seen since leaving St. Croix on April 2 for spring migration.

The CCB tracks the migrations of whimbrels from their breeding grounds in the far north to their winter territories in the Caribbean and South America. Hope, for example, commuted between the Mackenzie River Delta in the Northwest Territories of Canada and her winter territory on St. Croix.

Whimbrels often use the crab-rich creeks of Virginia’s Eastern Shore as a stopover and staging area on both northbound and southbound migrations. The birds are capable of flying legs of up to 3,500 miles during their migration and have used a number of strategies to deal with heavy weather.

One bird, Chinquapin, was a media star briefly in 2011 after successfully flying through the worst of Hurricane Irene. Two other birds, Machi and Goshen, also negotiated the hurricane but only to be gunned down in a legal “shooting swamp” on the island of Guadeloupe. Their deaths prompted an international outcry which led Guadeloupe and Martinique to declare a three-year moratorium on the hunting of whimbrels and other important shorebird species.

Hope is expected to spend September through March on her winter territory in the mangroves of Great Pond on St. Croix.  Great Pond is a 50-hectare mangrove wetland designated as an Important Bird Area and supports at least 72 bird species during some portion of their life cycle.

Hope is one of two dozen birds that have been tracked in a collaborative effort among the Center for Conservation Biology, The Nature Conservancy, U.S. Fish and Wildlife Service, Georgia Department of Natural Resources Non-game Division, Canadian Wildlife Service, Manomet Center for Conservation Sciences and Virginia Coastal Zone Management. The effort is designed to discover migratory routes that connect breeding and winter areas and to identify migratory staging areas that are critical to the conservation of this declining species.

The Center for Conservation Biology is a joint program of William & Mary and Virginia Commonwealth University.